These baby sweaters practically knit themselves. Another one came off the needles yesterday. 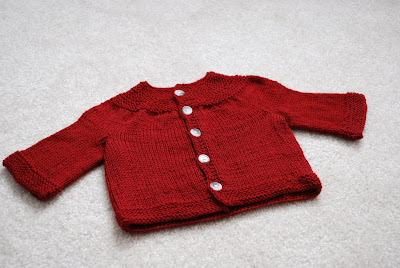 I fully admit that I copied what Jen did with this sweater. I think the result of changing the lace to stockinette makes this look like a cardiganized, child-size version of Cobblestone, a sweater I still love and want to knit one day.

As usual, I knit this sweater entirely in the round. I put the sleeve stitches on scrap yarn and cast on the underarm stitches before finishing the rest of the body. Then I picked up stitches for the arms and knit them using magic loop. The only finishing was weaving in the ends and sewing on the buttons.

Speaking of which, the buttons came from my grab bag and are a light faux horn -- not nearly as light as they appear in the photo. 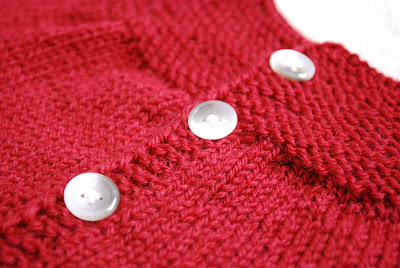 The Tour de Fleece is continuing, and thus far it's been very successful for me. I'm on my second bobbin of the Rainbow wool top (it's amazing how fast bobbins will fill up when you're not spinning super thin!). I also managed a feat I never imagined -- I won first place in the daily voting for my most recent sock yarn! So I guess you could say I won the yellow jersey for one day of the Tour.

I've been doing so much knitting for Rainbow lately that I thought it was time I started a project for myself. As it is the middle of the Tour de Fleece, I thought it only appropriate that the project be knit from handspun. So I finally wound my merino/silk laceweight and cast on for the Fountain Pen Shawl. I've made it through the set-up chart and the first several rows of the main body chart, and so far, I'm loving it. 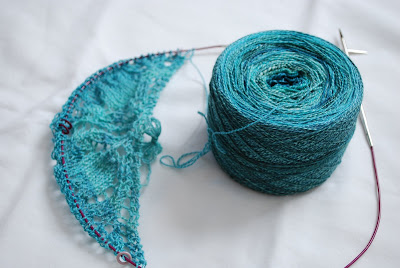