As I'm sure you're aware (if only because I've mentioned it quite a few times here), the Indie Design Giftalong is in full swing over on Ravelry. Seriously, if you haven't peeked in on the group, you should -- there are lots of gorgeous gifts being whipped up. In any case, part of the reason for starting the Giftalong in the first place was to promote indie designers and encourage knitters and crocheters to use indie patterns for their holiday crafting needs. I have to say that for me, even though I usually try to keep up with the patterns that are being released, it was a real eye opener -- I've seen so many amazing, beautiful, creative patterns that I wasn't aware of before. And while most of the design-related talk on this blog is about my own designing, I wanted to use the Giftalong as a good excuse to introduce you to some other indie designers whose work you may not have seen before. 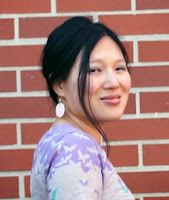 Today, that designer is Sara Peterson of knottygnome crafts. I've "known" Sara (as least as much as you can know someone from interacting with them online) for several years now, and she has some beautiful knitting designs and a really inspiring blog. Sara was kind enough to answer a few questions about her design process, and I'd like to share her answers with you.

What’s your design process like when you’re coming up with a new pattern? Do you start with an idea for a finished product, for instance, or does the design take shape as you’re swatching and knitting?


I admit to being a selfish knitter and I'm most inspired to design when I want something specific but am unable to find a pattern that is just right. I'm a visual person and I often make charts for both color and texture patterns on my computer in my spare time. I do a lot of interplay between charting and swatching until I find the combination of pattern and yarn that sings to me. Then I apply it to the garment, but I don't plot out everything in advance. I try to leave room for flexibility in the actual knitting. When I was designing Jane, I knew I wanted a stranded yoke, but I decided later on that the white sweater needed more visual interest. So I added colorwork bands to the sleeves. 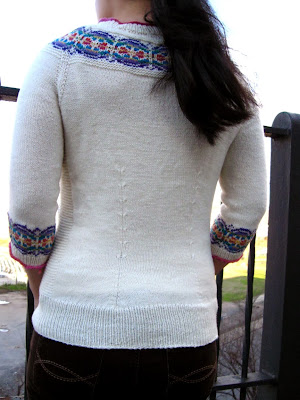 I like sweaters but I love to design accessories the most. There's something about starting with a small basic structure and finding unique ways to express yourself within those limits that i find very appealing. Plus as someone who always wants to move on to the next fresh idea, I like to make things that I can finish before I get bored with them! 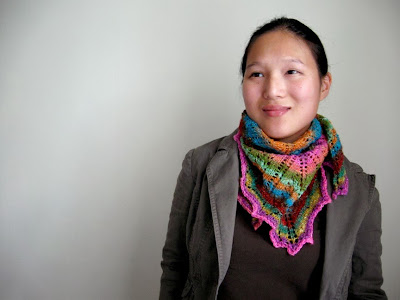 You spin and quilt in addition to knitting. How do your other hobbies influence your designing?


My design inspiration often comes from other crafts. A space-dyed wool top might influence a color palette for a quilt or a stranded knit design. I would say that color play translates the easiest from one craft to another. I love putting together color schemes whether it's for a handspun yarn, a quilt, or a plaid woven scarf.


I've also experimented with using classic blocks in quilting for colorwork charts. For example, even though the Norwegian star in Tindrer is a classic stranded pattern, I was drawn to it for its similarity in shape to the Lone Star block. 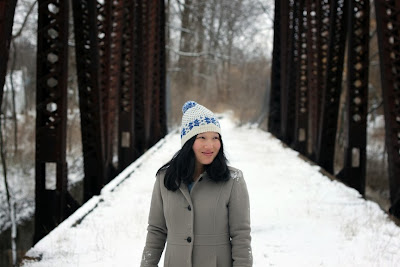 What’s in the designing pipeline for you?

I took a long hiatus from knit and crochet design to focus on other things, but I'm happy to say that I'm back to pattern writing. There's something about winter that makes me want to cozy up with wool. Right now I'm working on the sample for a pair of colorwork mittens and I'm swatching for a cabled hat. Naturally both of these ideas came to life because the weather is getting colder and I need a new hat and mittens for the upcoming winter season. I'm hoping to self-publish both patterns before the end of the year.


Thanks so much to Sara for sharing some insight into her design process. I can't wait to see what she comes up with next! In the meantime, do take a look at her Ravelry pattern shop to see the other designs she has available. You can also visit her blog for an interview with me!
Posted by Sarah at 8:00 AM