Though the Tour de Fleece ended a week ago, there were still some things left unfinished that I've managed to wrap up this weekend. For starters, you saw this yarn last Sunday, but it had not yet been washed, so here's the official final skein of Tour de Fleece 2015: 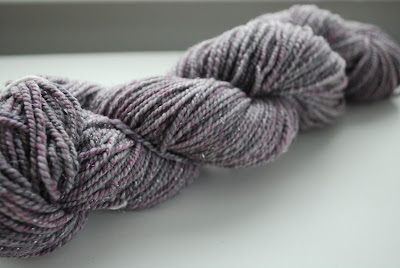 This skein ended up a bit thicker and shorter than the one it was being spun to go with -- it's probably DK to worsted in some spots and 172 yards. I'm a bit disappointed that I didn't get more yardage, but I suppose that is what happens when you hurry to get in one more skein. If anything, it's taught me that I can spin up 4 oz. of fiber in a jiffy if I need to, and this type of yarn might be the way to go to use up some of my fiber stash.

I also had started spinning up my Southern Cross Fibre Finn near the end of the Tour, but I only got about a third of the way through it. Late in the past week I decided to try to finish it up, and I manged to finish up all the singles last night: 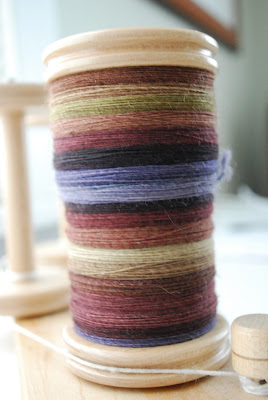 I had intended to spin this into sock yarn that I wanted to be kind of self-striping (much like my Boogaloo socks), so I split the top into four pieces lengthwise and then spun them in the same order. Unfortunately I don't think my singles were as fine as they should have been; I sat down and chain plied the whole bobbin this afternoon, and I think the yarn is going to end up about sport weight and probably less than 300 yards. It might still be enough for socks, but they'll be short socks. We'll see what happens when the yarn is dry. Here's a bobbin shot, for the time being: 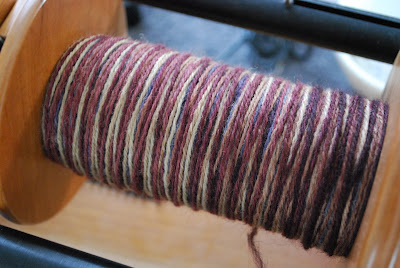 Meanwhile, in an effort to catch up with the SCF club shipments, when I finished the Finn singles last night, I pulled out the Shetland from May: 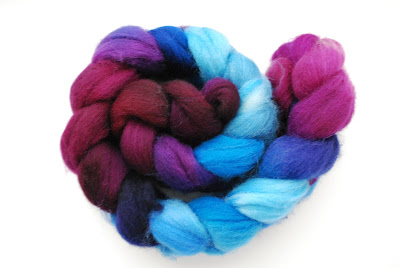 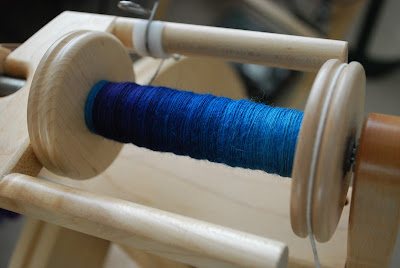 I'm not sure what I'll use this yarn for at this point, but I'll reserve my judgment until it's plied and finished. I think once this yarn is done, I'm going to need to spin something soft and luxurious, if only to let my fingertips recover (this coarser stuff gives me callouses!).
Posted by Sarah at 8:39 PM