Where I Left Off

The baby knitting, for the time being, is done. Last week I wrapped up two little hats to go with the sweaters. The first was one I made up as I went along. I used twisted ribbing at the brim and then a bit of the textured stitch pattern from the Boy Sweater. The top has spiral decreases and a little I-cord loop for fun. 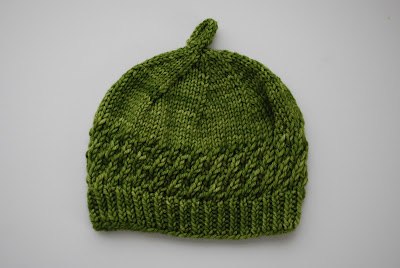 I didn't even bother to make a project page for this on Ravelry because it knit up so quickly and only used about 66 yards of yarn leftover from the sweater.

This wee bonnet, on the other hand, did get its own project page -- and you can see why. It's adorable! 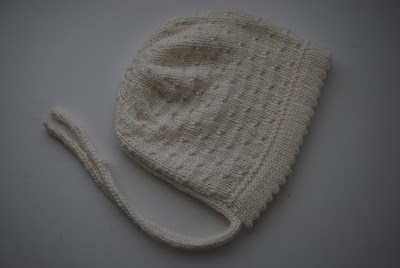 This was a fast, sweet little knit. The only slight change I made to it was to do a regular cast on rather than a provisional (I just joined using a loop from the cast on edge, which I think makes a nice decorative finish on the inside anyway). I used up most of the leftover yarn from the sweater, which was quite satisfying. I don't know if the bonnet will actually get used, but it's so darn cute that I couldn't resist. And of course the picot edging along the front coordinates so nicely with the sweater.

So now I'm back to my main, long-neglected WIP, my Airflow. I put in several hours on the first sleeve over the weekend, and I'm trying to keep it up this week so that it will get done soon. I have only about four or five inches left on the first sleeve, and the decreases are done at this point, so it's just mindless knitting. The only thing that slows me down is that I'm alternating skeins every round, so each time I finish around I have to take a few seconds to switch around the skeins. It's a pain, but I know it's worth it.

Because the bonnet was my lunchtime knitting, I had to cast on for something new over the weekend, so I wound up some handspun that had been sitting in my stash for a couple of years (at least) and started another simple top-down shawl. 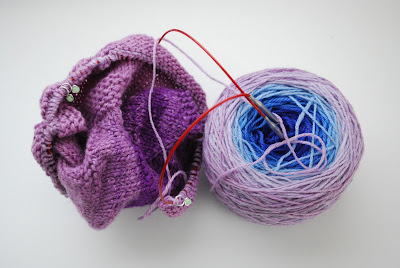 This is actually a design idea I had, so I thought I'd work out a prototype in handspun first before I worry about getting commercial yarn to knit a pattern sample. If it works out as I'm hoping, it'll be a great pattern for handspun because it can be lengthened or shortened as your yarn supply allows.
Posted by Sarah at 5:32 PM