There has been much knitting the past several days, and projects are finally starting to wind down. All the same, I also feel like I am running out of time.

First, the finished -- my Plummy Mitts are complete! 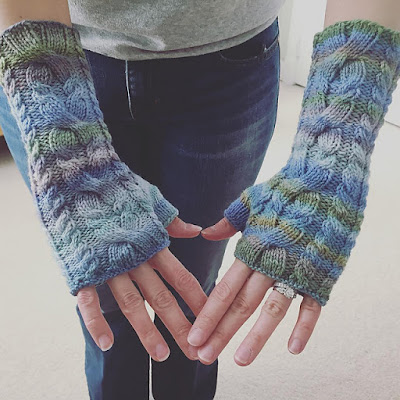 I made these exactly as the pattern called for, with zero modifications. And they are a perfect fit. After blocking them earlier in the week (in the hope that the yarn would bloom a bit, because the yarn used for the second mitt was a bit thinner than that used for the first mitt), I brought them into work yesterday and have been making good use of them when the office air conditioning kicks on (yes, even when it's freezing outside -- our HVAC system makes no sense). They are incredibly squishy and cozy, and I kind of want to wear them all the time. I still have a bit more than half of the yarn leftover, so I need to figure out what to do with it. Unfortunately it's not enough to make the matching cowl, but maybe I'll make another pair of mitts for home or something.

Meanwhile, I am in the home stretch on Rainbow's Vanilla Is the New Black socks, with just the foot of the second sock left to knit. I'm very confident that I can finish these up this weekend and have them ready for the first night of Chanukkah, if I decide to give them to her then. 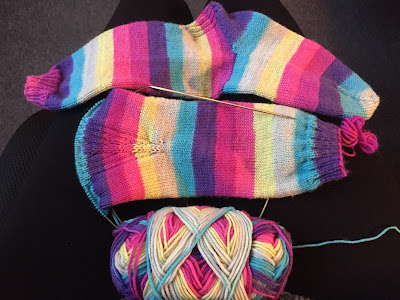 The one project that's causing me a bit of concern is my Flower Market Shawl, which is moving but slowly. That's really my own fault -- I just haven't been working on it as much. I'm through five of the eight repeats of the main body chart at this point, and I'd really like to have this finished up before we leave for our trip, so I'll be focusing on it more in the next two weeks to try to make that happen. 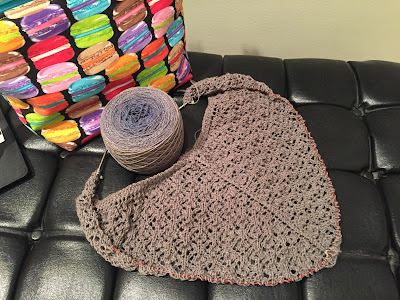 I've also got another pair of socks on the needles, cast on pretty much because I needed something to work on while putting Rainbow to bed (which means nothing with a pattern or that requires actually being able to see my knitting), and obviously I couldn't knit her socks in front of here. These are another pair in Knit Picks Felici, in the colorway Hawaiian Shirt. They're just a plain stockinette, but I'm planning to try out an idea for a new heel with them. 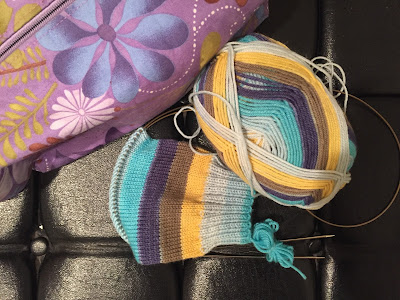 The weekend ahead is looking to be pretty busy, with a couple of birthday parties for Rainbow (one of which is hers) and a holiday party for us adults as well as podcast recording time. I'm still hoping to get in a few hours of crafting, though, and hope that by next week I'll have some noticeable progress to show you!
Posted by Sarah at 5:59 PM