Good news -- I finished Rainbow's socks before the start of Chanukkah (actually, with a few days to spare)! 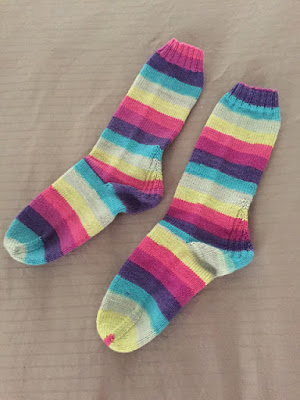 These were an easy, straightforward knit, and they would have been done a lot faster if I didn't have to knit them in secret. I'm anxious to see how they fit Rainbow's feet. I know she'll be thrilled with them, but we've been trying out different heel styles and seeing what she likes best.

I've been intrigued by this pattern for a while and could see pretty much how the heel was constructed, but rather than trying to wing it I thought it was worth it to give Anneh the money she deserves for figuring it out and writing it up. It is a clever heel and one that's not very hard to execute. I will likely make myself a pair at some point, if only in the name of science -- I'm really interested in how the heel wears over time without any sort of reinforcement.

Now that these are done, I have one last project on the needles that I'd like to finish up before we leave for Florida next week. That's my Flower Market Shawl, which has been seeing some action the past few days but probably not as much as it needs. If you'll forgive this horribly lit photo (it's snowing here today, which means there is zero light outside), here's where things stand at the moment. 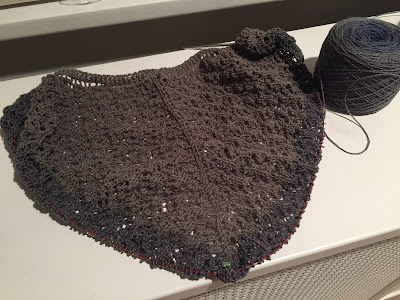 I'm almost done with the seventh of eight total repeats of the main body chart, and if you look closely, you can see that I've just gotten into the start of the transition from gray to blue. Here's a better shot (with colors that are a bit more accurate): 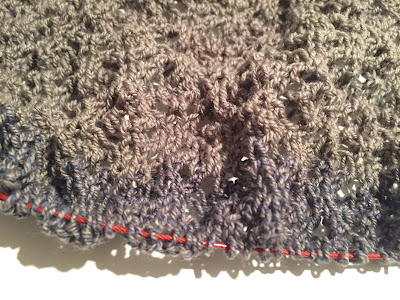 As is usual with lace, this looks like utter crap just sitting on the needles, but trust me when I say it looks really nice stretched out.

The shawl (and its charts) are a bit much to take to work for my lunchtime knitting, so I've got another pair of socks on the go. This is another pair in Felici (colorway Hawaiian Shirt) that's for me, and I'm trying out a new heel method. If you follow me on Instagram, you will have seen the first attempt yesterday that did not turn out as I hoped. I ripped back to the start of the heel turn and redid it, and I'm liking this version much better. 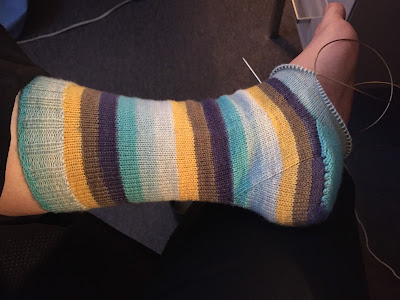 I've taken some rough notes of what I did that I'll be fleshing out a bit and testing with the second sock. It would be nice to finish these up before our trip as well so that I could take some new projects with us; to be honest, it seems more likely that I'll finish the socks by next Friday than the shawl, but I'll keep plugging away at both.
Posted by Sarah at 12:00 PM