In case you're wondering, that's how much time it takes to spin for and knit a fingering-weight oversized sweater. 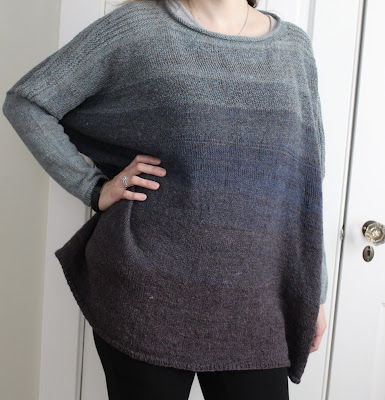 This FO is a long time coming. It was a monumental project, really. I have spun for sweaters before, but I'm fairly certain this was the most spinning (and knitting, for that matter) that I've done for a sweater before. And I have to say that I am very happy with how it all worked out. 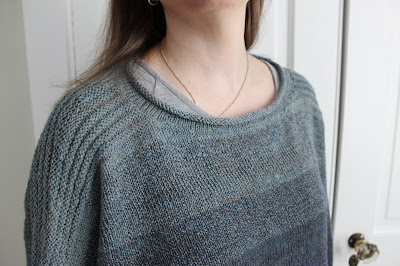 To recap, I bought fiber for this last fall during a HipStrings open studio even for Spinzilla. I originally bought two braids each of three colorways: Mussels (the dark purple), Bay (the medium blue), and Sky (the lightest blue). I later bought three more braids of fiber, thinking what I had wouldn't be enough. I inadvertently bought a fourth color, Depths instead of Bay, at this point, but because my plan was to do a fade, I made it work.

The fade was done in the spinning. I spun one skein of each of the three main colors alone using about 6 oz. of each color. Then I did two 8 oz. skeins in which I gradually faded from one color to the adjacent color. I did this by changing the makeup of each of the three plies of the yarn. There were four sections of each fade skein. It started with three strands of color A. Then it moved to two plies of color A and one of color B, then one of color A and two of color B, and finally three of color B. The only place I had to manually fade the colors is the area just below the bust, and that was in the transition from Depths to Bay. You can see it if you look really closely, but I don't think it's terribly obvious.

When I got to the yoke, I divided each section of the remaining skeins in half so that the front and back would match. I finished up the sleeves with the Sky-only skein (also divided in half). 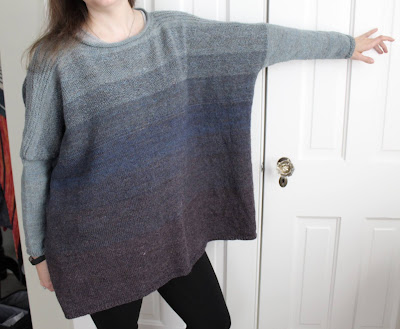 I ended up using much less yarn than I spun. I eliminated the entirety of the Bay-only skein, and I also omitted the Mussels section of the Mussels-to-Depths skein. The sleeves used only about half of the Sky-only skein. In total, I used approximately 1,615 yards, leaving me 700-ish yards of the total I spun.

My only modifications to this pattern were adding about four inches of length to the body (I wanted this to be big and cozy and didn't see the point of making the body cropped) and continuing to work the sleeves until they came down to my wrists, incorporating four additional decreases.

So it's done. Do I love it? Hard to say. I think because it's so hot outside, I'm having a hard time thinking about wearing it. But I think it's going to get a ton of wear this fall and winter, and I'm pretty sure I'll fall in love with it then. For now, I'm very happy with it. I love how the yarn turned out and how it knit up as I planned. And I'm certainly happy to finally be done with such a huge project!
Posted by Sarah at 7:38 AM