It's been quite a weekend for finishing things! Most notably, yesterday morning I finished plying my giant skein of Southern Cross Fibre Charollais, and it was so big and poofy that I actually had to manually wind the last couple of yards onto the bobbin because the flyer would no longer turn. I almost immediately skeined it and tossed it in to soak, and it was finally dry this afternoon. 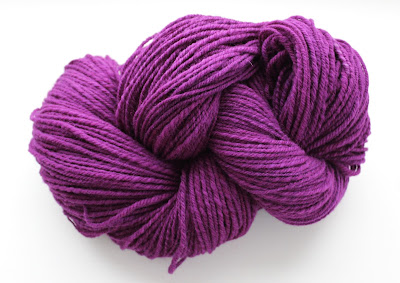 This skein is so enormous that it took quite a feat of strength to twist it into this quasi-hank. It is super squishy and elastic, too. While it looks to be perhaps a bit thicker than the first skein, yardage-wise it's right there: The first skein was 355 yards and the second is 358. Pretty darn close! Here they are together: 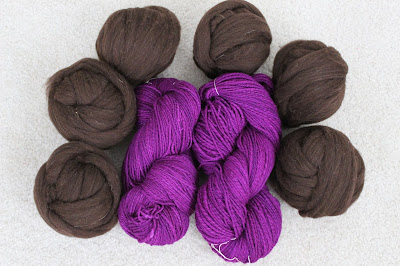 The brown fiber around the skeins is chocolate Bond from Southern Cross that I'm hoping to spin into two skeins to match the purple ones. Ideally, I'd like to knit a big, cozy colorwork sweater using the two (maybe a Lopapeysa?).

Before I start spinning the Bond, though, I want to finish up my other Tour de Fleece spin in progress, and I've literally just completed the second bobbin of those singles: 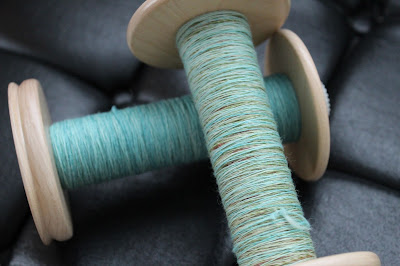 Lest you think I'm spinning up all my fiber, I have some new acquisitions courtesy of the Southern Cross fiber club. These arrived in one package yesterday; I got an e-mail from Australia Post that they'd been delivered just as I finished up my Charollais skein!

June's shipment is called Allegory and is on oatmeal BFL, so it has that wonderful depth of shade from the natural color of the fiber. 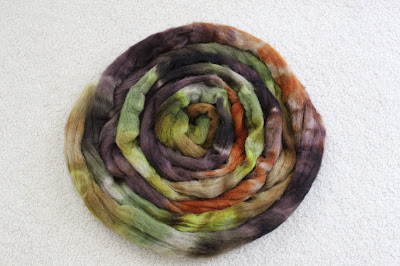 The colors of this really make me think of fall leaves when some are just beginning to turn but there's still a fair amount of green. I think I will likely spin a fingering-weight two ply out of this.

July's shipment is on Polwarth, my absolute favorite fiber, and is in a colorway called Plot Twist. 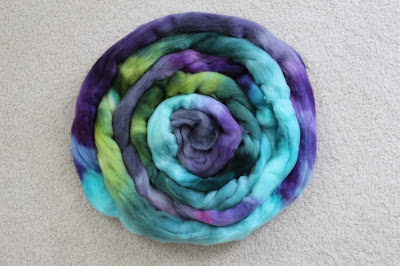 There was some more major finishing this weekend -- but you'll have to wait until my next post to find out about that!
Posted by Sarah at 4:28 PM