This week it feels like a lot of things are coming together and creating the right conditions to finish up some big (or big-ish) projects. First of all, I've got two bobbins of singles spun up for the second skein of Southern Cross Fibre Charollais and will, with any luck, have the third and final bobbin done tonight. 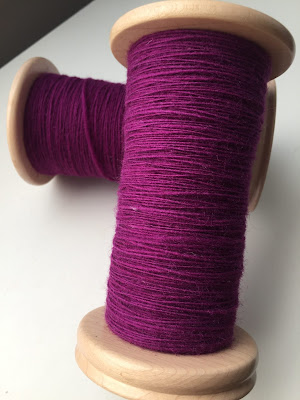 In the grand scheme of things, this isn't such a huge project -- I've certainly spun much larger quantities before -- but considering that the first skein was finished a year ago, it feels very good to put this spin-in-progress to bed.

The bigger project, and once that really has been ongoing for quite a long time, is my handspun Boxy. I finished the first sleeve and picked up for the second over the weekend, so if I can just pull myself away from the spinning for a bit, this sweater might actually get done this week. 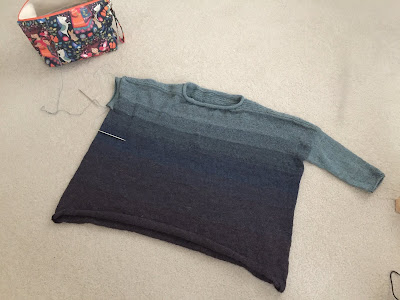 Although it still looks a little awkward because it hasn't yet been blocked, I've tried on the sweater and it fits. It is much longer than the original, intentionally, but if it ends up being too long after blocking, a bit of sweater surgery might be required. I'm a little amazed at this possibility considering that I have a significant amount of yarn leftover or unused despite adding additional length and making the sleeves full length, though I suppose that having too much yarn is a much better position to be in than not having enough. This project was started last November (the spinning, anyway) and cast on May 1 of this year, so I will be very, very excited to see it done.

In other non-long-term project news, I'm just about finished with the first sock of a pair I cast on last weekend, using some stash yarn from a kit I bought sometime last year. 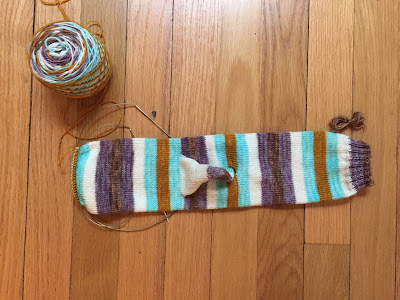 The yarn is Fibernymph Dye Works Bounce in the colorway Winter Critters, and I've gone back to my Non-Euclidian heel for these. Like with the last pair of toe-ups, I've made a slight adjustment to the numbers (so I'm essentially knitting a size in between two other sizes) to get a bit more negative ease, and so far they fit perfectly.

Once my Boxy is officially done, I might take a break from sweaters for me to knit one for Rainbow. Though it is the middle of summer and she won't need it for a quite a while, and there are some designs I've been meaning to get to. Hmmm.
Posted by Sarah at 7:25 PM