An intense three weeks of spinning is officially over, and while I'm not burned out on spinning, I have noticed an increase in my desire to knit. I want to cast on all the things! But before I do that, I figured I should finish what's already on the needles, so last night I sat down and finished up the fingerless mitts. Rainbow was kind enough to take some photos for me today -- I think she's got a lot of potential as a knitwear photographer! 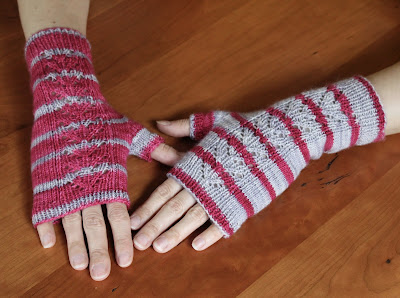 I'm very happy with how these have turned out, and thanks to being home with Rainbow the past two days (she leaves tomorrow for her first stay at overnight camp, so I wanted to spend some extra time with her), I've managed to get these and the pattern done and off to my tech editor.

So now the only project on the needles is Rainbow's socks, which are moving right along. 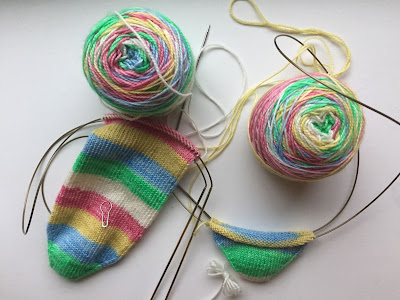 I took the first sock to a movie over the weekend and finished the foot, so I figured I'd cast on the second and get it to the same point. I rarely knit my socks in tandem, but considering I'm planning to knit until the yarn runs out, I thought it might be useful to have both socks going at once so I can make them match as much as possible.

I have a feeling more projects will be cast on by the time I post again. I've gotten two skeins of yarn out of the stash to wind for a new hat and I've also got an idea for a shawl for some yarn I picked up at TNNA in June. The mojo is back, big time!
Posted by Sarah at 3:33 PM