Today I feel a bit like in a time warp and have gone back to middle school. Why? Here's what I spent my afternoon doing: 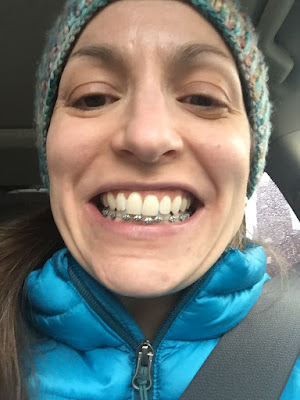 I originally had braces a number of years ago (we won't say how many), from seventh grade until ninth grade. My teeth are still fairly straight now, with the exception of one tooth on the bottom. That tooth has been the cause of three gum surgeries over the past several years -- my periodontist believes that because the tooth is sticking out a bit, it's stretching the gum tissue and causing it to recede. So we're hoping that getting that tooth aligned will fix the gum issue once and for all.

It's been a bit trippy to do this, not just because I feel like I'm a teenager again, but also because I went back to my old orthodontist to do the work. He has a big wall in his office that he used to have all his patients sign (I'm not sure if he still does it, as it's pretty much covered by now), and when I went in for my initial consultation, Rainbow in tow, I found my signature on the wall. I guess it's good to know that some things haven't changed!

But enough about teeth -- let's talk knitting! I am still working on secret project #2 and getting closer to finishing (my hope is that I'll be done by the end of this weekend). Last night I cast on a pair of socks for the Lots of Socks KAL, in part so I could take it with me to my appointment today. I'm knitting up the Zigzagular Socks by Susie White using a skein of Fibernymph Dye Works Bounce in the colorway Girl Seeks Rain (I picked up this skein at Needles Up Maryland last year).


I've had to modify the pattern just a bit: It's written for a gauge of 8 stitches per inch using a US 1/2.25 mm needle. But I'm using a US 0/2.0 mm and working at a gauge of 9 stitches per inch, so I was between stitch counts. Fortunately, it was easy enough to cast on a number between the two larger sizes and figure out how to place the twisted stitch panel. I'll likely do my own thing for the heel and toe, as my numbers won't match, but you shouldn't be able to tell when I'm done (unless you want to get really, really close to my feet to count my stitches). I'm really enjoying the pattern -- it's a nice break from plain stockinette, my usual MO for self-striping, and doesn't require too much thought. With as busy as things have been recently, and given that I've been under the weather with a rather annoying cough for more than two weeks, almost mindless perfectly fits the bill.
Posted by Sarah at 3:58 PM