I don't set much store in a groundhog's weather forecasting skill. In fact, as I write this, it's snowing outside, so I think Phil's prediction of an early spring was a bit premature. But I'm feeling springlike with my spinning.

After finishing up my combo spin, all 12 oz. of it, I needed a bit of a palate cleanser. I wanted a quick, easy, mindless spin. I was already halfway through the bag of mini braids of BFL/silk from Fibernymph Dye Works last Sunday, and I finished the last two colors very soon thereafter. I had intended to ply each color back on itself for four mini skeins, so on Friday evening, I used my ball winder to make four center-pull balls and plied all four of them. They were washed yesterday and fully dry by this morning. And they're perfect. 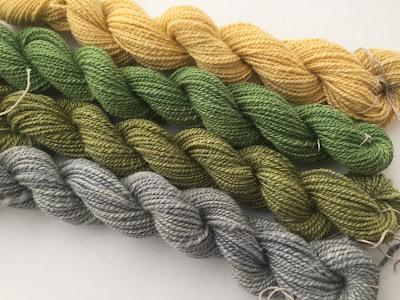 The yellow and bright green at the top are probably a sport weight, on average, while the drab green and gray are probably closer to DK. They range from approximately 59 yards to 85 yards, for 290 yards from 121 grams overall. I might combine them all in one project or put them up in my FiberCrafty shop. Here they are twisted together -- they make me think of early daffodils: 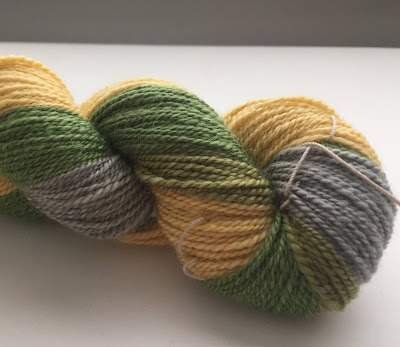 As long as I was in a mini skein sort of mood, I decided to pull out the two really rough fiber minis from last year's Merry Month of Minis shipment and spin them up. These were much smaller amounts of fiber (each less than 10 g). As with the BFL/silk, I wound up center-pull balls and plied them back on themselves. They're still a bit wet, but I've got them resting on the radiator, so they should be dry by morning. 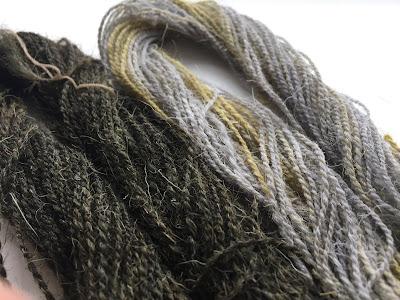 The darker skein on the left is Karakul and the lighter one on the right is Welsh. Both were very coarse and heavy on kemp, though I was able to spin them relatively fine (fingering weight, I'd say). I think I will likely weave them on my Zoom Loom and then try to felt the resulting squares to use as coasters, perhaps as a double thickness using one square of each fiber. At the very least, it'll be an interesting experiment, and I hate wasting fiber -- the dye job on these was pretty, even if they didn't feel great.
Posted by Sarah at 4:42 PM