One of my goals for the long weekend was to finish up my last secret project so that it wasn't hanging over my head anymore. I was very focused and finished up Saturday afternoon. I even wrote up most of the pattern on Sunday. I was feeling all smug and proud of myself for being so productive -- and then last night I looked at the finished sample and saw something that somehow I hadn't noticed before.

See a problem? As the Prairie Girls would say, Son of a stitch! Apparently I was so confident when I started the second sock (yes, these are sock cuffs), I didn't bother to check what rib pattern I had used for the cuff of the first sock. So now I have one cuff in 2x2 rib and one in 1x1 twisted rib. That means that tonight I get to cut one cuff off and reknit it. They won't be a perfect match, but I can't very well leave them this mismatched. The irony is that when I was writing up the pattern, I couldn't remember which rib I'd used for the cuffs (I was typing in the kitchen while the sample was up in the bedroom), so I'd left that section blank for the time being until I could double check. It didn't even occur to me that the reason I couldn't remember which rib I'd used was that I'd used both!

Fortunately it looks like this one snafu is the only one among my WIPs. I've picked up my Zigzagular Socks as my lunch break knitting and should get to the heel today. 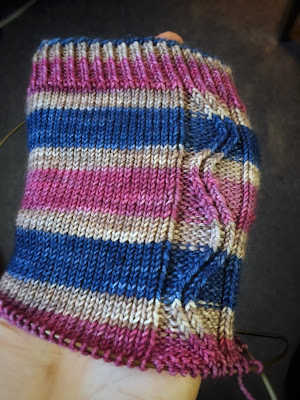 And I've started a new project! My college roommate (and maid of honor) is expecting a baby girl this spring, and unfortunately I'm unable to make it to her baby shower next month -- it turns out that while Pittsburgh may be a great place to live, it's highly inconvenient for trying to travel anywhere. I decided to knit something up to send to one of the shower organizers so that she can open it at her shower, and rather than shopping for yarn, I decided to do the virtuous thing and shop my stash. I was rewarded for my efforts with the discovery of four skeins of Blue Sky Alpacas Organic Cotton in a delicate pale green that I bought more than a decade ago. I pulled some large (for me) needles and the charts from Evelyn Clark's Shetland Triangle shawl and got to work. 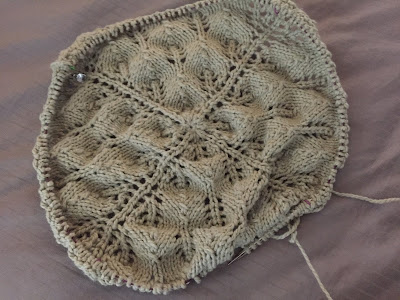 I'm not following the shawl pattern per se, but I'm using the lace pattern to create a center-out square blanket. I'm not sure if I'll use all four skeins of the yarn, but I've just added in the second skein and am now alternating between it and the first (three of the four skeins were from one dyelot, but as I can't tell which is the odd one out, I'm alternating just to be safe). While this cotton is incredibly soft and fluffy, it's still a little hard on my hands, so I can't knit for too long on this project. But chunky lace on big needles goes quickly, and I imagine I'll have no trouble getting this blanket done in plenty of time to send it for the shower.
Posted by Sarah at 7:31 AM