My combo spin is officially done, and I couldn't be more pleased. 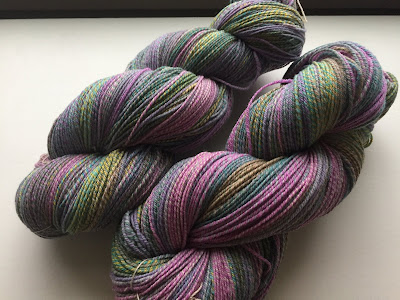 My second skein ended up slightly plumper than my first, measuring in at almost 100 yards less. But I think it should work out fine for the pattern I've been spinning for, Tegna. I can use the thicker yarn on the top of the garment, which will hold the weight of the top, and the thinner yarn at the bottom. The difference isn't really even apparent unless you look closely. 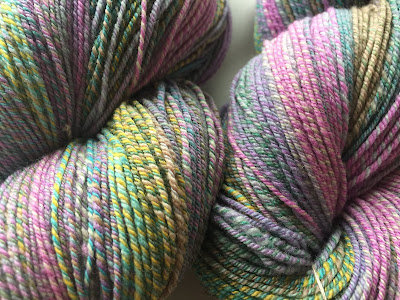 Overall, I ended up with approximately 1,005 yards, which should be more than enough for my Tegna, and used up 12 oz. of fiber from my stash (we'll ignore, for now, the fact that I bought the braids for this project). More importantly, though, this project has me looking at my fiber stash in a whole new way. I have so many 4 oz. braids of pretty fiber that aren't really enough for much other than small accessories if spun up on their own. But there are plenty that I could combine in another combo spin for a large project. I think it's fair to say that this is only the first of what could be many combo spins!

After spinning 12 oz. of the same fiber, I decided to change things up a bit in the next thing on my wheel. I pulled out a bag of BFL/silk from Fibernymph Dye Works that I won as a knitalong prize last year. It was from one of Lisa's fiber clubs from a number of years ago and had small braids (I'm assuming 1 oz. each) of four colors. I decided to do a quick-and-dirty spin of each color and have gotten singles of two of the four colors spun already. 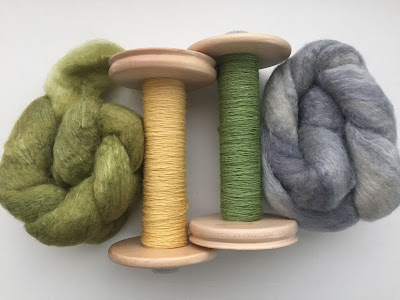 The name of this set is Emergence, and it definitely makes me think of daffodils blooming in early spring. I'm spinning each color on its own and am going to ply each back on itself for four mini skeins. Given how quickly these two bobbins have spun up, I wouldn't be surprised if I have finished skeins by this time next week!
Posted by Sarah at 4:48 PM