Contrary to what the title of this post might imply, it's not about math. Rather, because it's a Three on Thursday day, I have two sets of three things to share.

First, let's talk about the knitting. Because I'd finished up all my deadline knitting before leaving for Rhinebeck, I used the trip to start (and, in one instance, finish) some new projects. The smallest was actually started before I left, but I didn't like how it was knitting up and ripped back a bit before knitting the rest of the project. That's a wee hat for my nephew for Halloween. 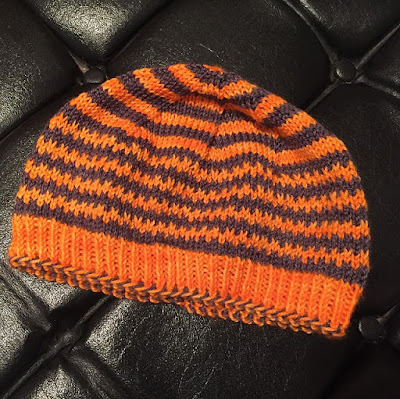 I'm happy to knit for him anyway, but I thought I'd do triple duty with this hat by knitting him something for the season that would also count for two things in the Down Cellar Studio podcast Pigskin Party. One is a team competition involving a bingo card and NFL teams and their colors; I covered a square for the Bengals (or, as we call them here, the Bungles) with this hat. I also can count this toward the October Interception because I used a two-color cast on following this tutorial from Cori Eichelberger, aka Irocknits. On the trip home, I ripped back to the brim and then knit everything else -- it's quite satisfying to knit baby hats! I alternated three rounds in each color and for the body of the hat slipped every other stitch on the first round of each color. I really like the look of this and am sure to use it again, perhaps adjusting it a bit so that I continue to slip through the crown.

I also started a new pair of socks for Rainbow on the trip up, using the latest shipment from the Fibernymph Dye Works Just Desserts club. This colorway, Favorite Carrot Cake, wasn't really my style, but Rainbow happily grabbed it up, so I'm using it for knee socks for her, with the contrast skein for the heels and toes (and maybe the cuffs, if I have enough). 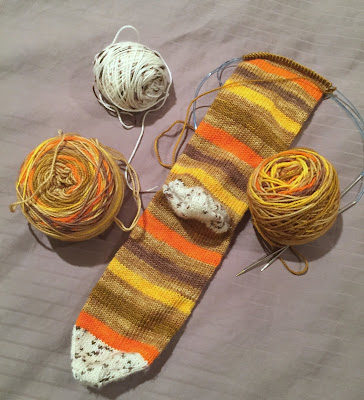 If you need any proof that knitting socks on size 1 needles (as opposed to my usual 0's) is fast, consider that I did all this in not very much time. You can see that there's quite enough yarn left; I split the skein in half when I wound it so I could knit until I ran out if I wanted to, but I have a feeling these will be plenty big before I run out of yarn. I've got about seven inches of leg knit above the heel and will likely do a couple of increases soon to accommodate her calf. I may also pause in this sock and knit the second to the same point so I can determine if I have enough of the contrast to do the cuffs.

Finally, I cast on a new design, which frankly isn't much to look at right now but has been some very relaxing knitting. I haven't done a top-down triangle shawl in a while, and it feels a bit like coming home. 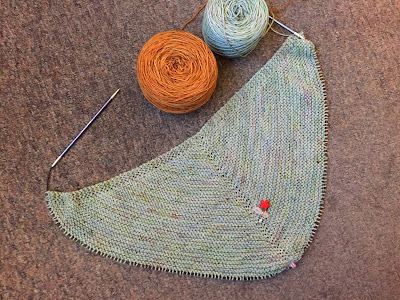 The colors are very off here (we've reached that time of year when it's nearly impossible to get a decent photo), so trust me when I tell you that the colors are much more saturated and rich in real life. I'm using two colors of Dusty Tree DyeWorks Root (fingering weight) that I bought from Rebecca at Indie Knit and Spin last year. I've been saving these two skeins for something special and finally decided they would be perfect for this design. The second color, which is much more rusty than it looks here, will get introduce toward the bottom of the shawl.

For someone who allegedly doesn't like orange, there's quite a lot of it here, isn't there? I suppose I'm warming to it.

I've been working quite a lot on my crochet granny square blanket, but I will wait until the weekend to get a photo.

Now, on to the reading! I've finished (or nearly finished) three books in the past couple of weeks:
Head on over to Carole's to see what others are doing this Thursday!
Posted by Sarah at 9:36 AM