What a difference a week makes, eh? It feels like an eternity since last Tuesday, but one benefit of all those anxious days is that I got a lot of knitting done and have a big FO to share today! My apologies for not having any modeled shots just yet; I'm the only one home today, and you already know that I have very poor selfie skills. I promise I will get some modeled shots soon, but for today you'll have to enjoy the old sweater on the floor trick. 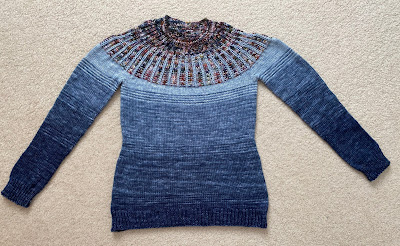 This sweater was one of the biggest projects on my 20 in 2020 list, and I'd intended to knit it with this sweater set since last year. The set came with six skeins of yarn, a five-skein gradient in shades of blue and one variegated skein to coordinate. Although Joji's sample uses two solid colors, I thought the pattern would look just as nice with a little more color variation.

I dithered a bit about which size to knit because Joji recommends some positive ease, but I knew that I was also using a superwash yarn that was likely to grow, and I didn't want a few inches of positive ease to turn into a potato sack. So in the end I opted for the size that would give me pretty much zero ease, and though I can't prove it yet with a photo, I can tell you that the fit is perfect. It's fitted with a long-sleeve t-shirt on underneath, but it's not tight. 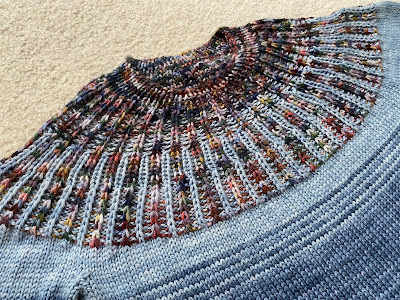 The yoke in this sweater is really clever. It looks like stranded colorwork, but it's actually slip-stitch colorwork, meaning you only ever use one color per round. The increases are very cleverly incorporated into the design, too. I think the impact might be a bit stronger with solid colors, but I really like how the variegated yarn knit up here.

As far as the gradient went, I had to pretty much wing it. Every time I introduced a new color, I worked a total of eight rounds, alternating colors every round. When to introduce a new color was the real guessing game, because I wanted to be sure that I had enough of each color to work the same sequence on the sleeves as well as the body. I suspect there was probably some math I could have done to be more exact, but I really just made a guess when to switch by weighing what was left in each skein and starting the switch when I had between 40 and 50 grams of yarn left. I don't think it's terribly obvious, but if you look closely at the sleeves as compared to the body, you'll see that the sleeve colors, while in the same order, don't have quite the same proportions. 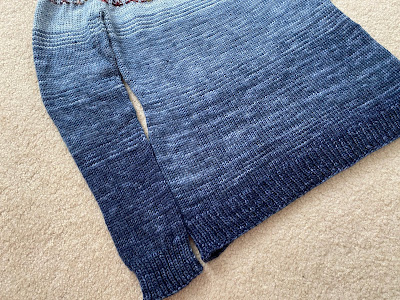 It would have been cool if the colors transitioned at the exact same spots, but I really don't care that they don't. I'm more than satisfied that I managed to get all the colors on both body and sleeves without running out. What's more, I never even had to break into the final, darkest color in the gradient! Here is how much yarn I have left: 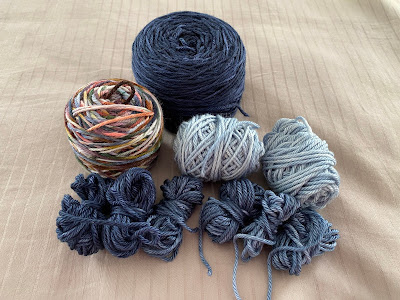 You can see I cut it pretty close on the darker blues, and I'm feeling pretty good about maximizing my yarn usage because of that. I think the untouched skein will likely be a charity hat, and I might just have enough with all the scraps combined for another one.

We're expecting record-breaking high temperatures here today (close to 80!), but rain is coming through tomorrow and then we'll be back to more typical weather for this time of year, so I expect this sweater will get its inaugural wearing pretty soon. Bring on the sweater weather!