It's Thursday, which means I just have to get through today and tomorrow and then I have 10 days in a row off. I am excited about that break, but I'm also a little scatterbrained, so today I'm linking up with Carole and friends with three random thoughts.

1. An unintended running break
I've been running a lot more since this whole pandemic started and in the past couple of months had gotten into a pretty regular schedule of alternating two days of running with one day of walking (my knees appreciate the break). But I haven't been able to run in a week after doing something to my hip, I think pulling a muscle, last Thursday. It happened early on in the workout, and I stupidly kept going, even though I should know better. When I got home, I was in a fair amount of pain. Thankfully it was better the next day and has been improving ever since, and I think today I might try running again (though I'll likely do a shorter distance than usual so I don't overdo it again). I suppose if I had to take a break, it came at a good time, because I donated blood on Monday and wasn't allowed to do any vigorous exercise for a day or two afterwards. And I've been walking every day, so I'm still getting my steps in. But all the same it will be good to get back to it.

2. Thanksgiving planning
I can't believe we're only a week away from Thanksgiving! It's definitely going to be very different this year. Usually my parents host and we have a big crowd of extended family. This year my parents are in Florida and dinner will be just the three of us, though we'll be splitting the cooking (and the food) with my brother and sister-in-law, who live about two blocks away. I am making a turkey for the first time ever (my mother assures me it's very easy!) and making my great-grandmother's stuffing and Ina Garten's cranberry sauce. Rainbow and I will also be baking pumpkin muffins, as we do every year, and she's requested that we make an apple pie for dessert. I know it'll be a bit sad and lonely to be just the three of us at the table, but I think we have a lot to be thankful for.

3. Unexpected knitting
Rainbow's school had already planned to be off all next week, but last night we received an email letting us know that they've decided to go online for at least the week after Thanksgiving (whether they'll be back in person or remain online for the rest of December will be decided at the end of that week). She has been slowly knitting a cowl for her fourth grade teacher for while now, but now that there's a possibility she won't be back in school before the winter break, she is desperate to get it finished so she can take it in and deliver it tomorrow. Which means, of course, that I am the one knitting it. 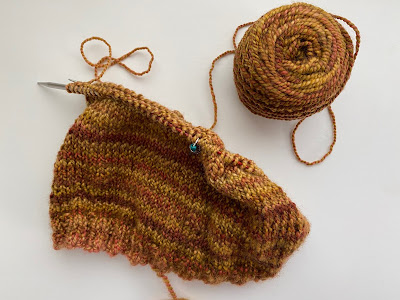 This cowl is using some of my handspun (some BFL that I spun a number of years ago) and is just stockinette with some ribbing at the ends. The full skein had something like 137 yards in it, so I'm hoping it's realistic to finish this up by the end of the day, but obviously this is not knitting I had planned to do today. Oh well!

I hope you have a calm end to your week, and I promise to be more focused the next time I post!