Monday mornings are always hard, but I'll admit this one was a bit easier because I realized when I woke up that this is the last Monday of work for me this year! I have just three more days of work, and that includes Wednesday, which is the day we're having our office holiday party (via Zoom), so that's kind of a partial work day. I was anticipating that it was going to be a crazy final few days of work, and it still might be busy, but at least one project I was expecting to hit isn't going to, so I'm feeling less stressed.

Another reason to feel less stressed is that all of my holiday knitting is done! I finished up my nephew's blanket on Friday night and blocked it on Saturday. 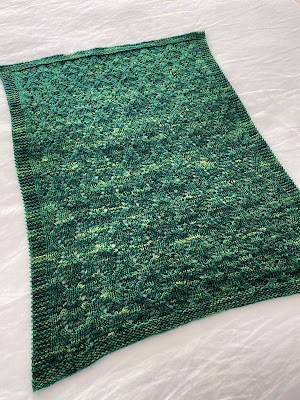 I'm actually surprised, pleasantly so, that I knit this as quickly as I did. The lace pattern itself isn't very difficult, and while I didn't exactly memorize it, it's intuitive enough that I only needed to check in on the chart at the beginning of each right-side row once I'd done the initial repeat. I didn't know exactly what size to make the replacement blanket because while the approximate dimensions were in my Ravelry project page, I didn't note how many repeats that translated to, but I was at least able to count the number of lace repeats on my photos of it to estimate how many to cast on (83, for the record). I then enlisted Rainbow's help in determining when it seemed long enough, and we decided that nine vertical repeats is enough. I did go down in needle size as well, so I know this version is smaller. The pattern calls for an Aran-weight yarn and size 10/6 mm needles, and on the first version, I used worsted-weight yarn and size 8/5 mm needles. I had noted on my project page that the fabric was rather loose, so I went down another full millimeter this time around and am much more satisfied with the density of the fabric. I did stretch it enough in blocking to open up the lace and give the fabric some drape, but it didn't feel floppy or loose.

Last night we had the immediate family (our parents and siblings) over to celebrate Rainbow's birthday, and we took advantage of the get-together to give some gifts of our own, including the blanket. My sister-in-law said that she though the replacement blanket looked just like the original, and my nephew gave it his seal of approval as well: 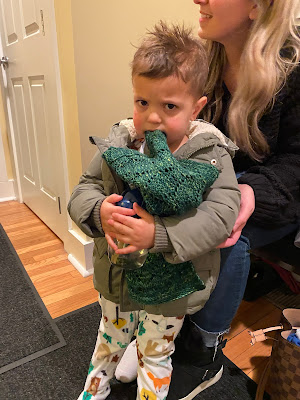 I know he looks grumpy here, but that's just because he was tired (if you look closely, you'll see he's in his pajamas already -- it was past his bedtime). The fact that the blanket is in his mouth is a good thing; that is apparently part of the reason the first Green Blankie fell apart. The fact that this went right in his mouth means there was no suspicion that this was not his beloved blanket, and that's a win in my book!

Now that the gift knitting is officially done, I am focusing on spinning again this week. I have about half a bobbin of singles to finish up for my combo spin (the one I've been ignoring for the past month or so), and I'd like to do that at a minimum before we leave for our trip. It would be great to get all the plying done as well, but that might be pushing things, and certainly a lot depends on how much work comes in over the next few days. I have one small knitting project in progress that I'll likely be able to finish up in the next couple of days, and I have vacation knitting to plan!