Good morning from southwest Florida! We arrived safely after a pretty easy flight on Saturday afternoon. We've had issues in the past (delayed flights, waylaid luggage), but this time the only hiccup was that it was raining when we landed and our luggage got a little wet. Eh, I'll take it. Flying felt a little surreal, but when we arrived at our gate, the flight before ours was boarding and Rainbow spotted one of her classmates in light to get on, and then we saw some friends we almost always see on our way down and the head of Rainbow's school and her husband, all of whom were on our flight. We often say that Pittsburgh is a small city, but this really demonstrates it!

On the plane, I worked on another double-layer hat, which I cast on Friday morning in order to do the cast-on tutorial. It's moving right along, and I'm not in any hurry to finish it, so it's a nice relaxing knit. 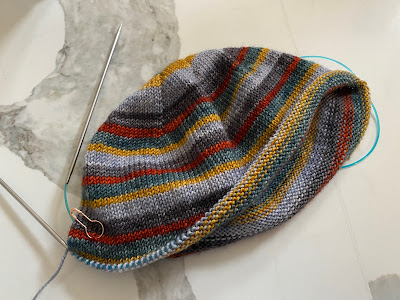 The bulb marker shows where I was when I started working on it yesterday, though I didn't spend much time on it. The yarn is Fibernymph Dye Works Bounce, and it's the special "25th day" exclusive colorway that was an add-on to my minis set. The colorway is called Winter Shadows, and Rainbow and I have decided these colors will suit my sister-in-law (the one who's the mother of my nephew).

When I was picking out projects to bring with me, I considered bringing my Shifty to finish but decided I didn't want to deal with all those skeins of yarn. Instead, I brought a new project to cast on, which I did yesterday morning: 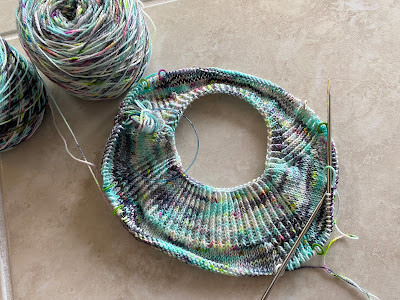 This is the very start of May(be) Queen in (guess what?) FDW Bounce in the colorway Runaway. I'd bought four skeins of it several years ago intending to use it for another Boxy but obviously never did. The pattern is pretty involved, so it's not a read-while-knitting project, but it was good for yesterday Zoom session and while we watched Home Sweet Home Alone last night -- very cute and funny movie, by the way! Even the Mister, who often needs a lot of action and explosions to hold his attention, enjoyed it.

Today I am planning to fully enjoy the fact that it is Monday and I don't have to do any work. In a little bit, I'll head out for a long walk (I did 6.5 miles yesterday and intend to do the same today). I'll try to finish my current library book and work on my sweater some more. Maybe I'll take a nap. Maybe I'll dip my feet in the pool. The world is my oyster! 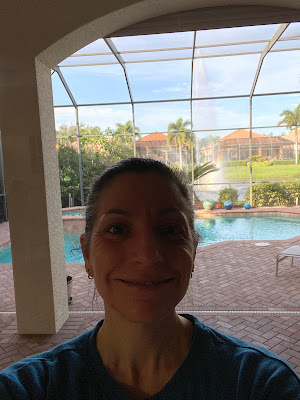 This is the best I can do to share some of Florida with you, for now. I hope that this Monday treats you gently and you can find some way for it not to feel like Monday to you!