Happy Friday! Today is officially my second day of vacation, but it started with an early orthodontist appointment for Rainbow and will likely be filled with cleaning and packing and everything else I need to do before we leave for our trip. But first, I have maybe-new cast-on to share with you that I (in the words of Elizabeth Zimmermann) "unvented" when I started the second of my doubled hats.

When I started Rainbow's hat, I used the Emily Ocker method of casting on, but I always find that a bit fiddly because I have to find a crochet hook to do it. As I was getting ready to start my own hat, I started brainstorming ways to achieve a similar look but without needing any tools. It's likely someone else has already figured this out, but I though I'd share with you what I did. I have just photos for now, but if I can get someone else to help me at some point, I might be able to take and post a video.

This cast on is a sort of mash-up of the above cast-on and a figure-8 cast-on. First, you'll start by making a circle with your yarn, large enough for your ball of yarn to fit through. Tie it in a half knot, just so that the circle stays intact (you'll untie it later). Lay the circle to the left and put your needle tip to the right, with the yarn attached to the ball going on top of the needle. 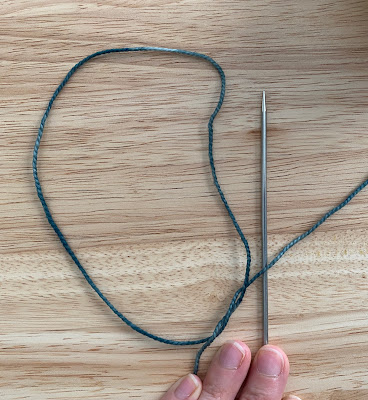 Repeat the above steps until you have the correct number of stitches on the needle, securing the last stitch around the needle by passing the ball of yarn through the loop. Close up the loop most of the way by pulling on the yarn tail. 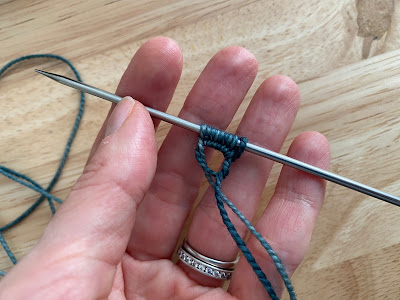 Now divide up your stitches as needed on your needles; I'm going to be working magic loop, so I split the eight stitches I cast on in half. 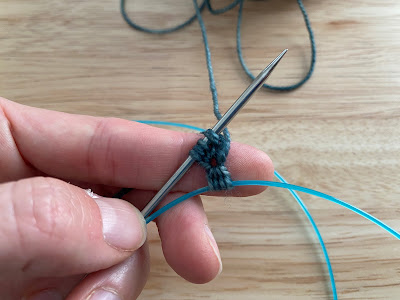 Knit all the stitches for your first round to stabilize the cast-on. 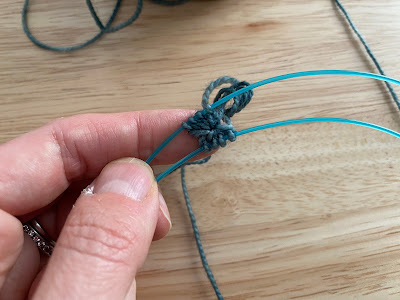 Now you're ready to start increasing! To tighten up the cast-on, just tug on the yarn tail (I've made a little yarn butterfly with mine). You may notice that the circle wants to loosen up a bit as you work, but you can pull it snug again very easily. Once you've got enough fabric knit, you can pull the tail tight and weave it in.

You may find that this cast-on is a little fiddly, but it's easy to tighten it up after you've gotten the stitches on the needle. You can also make the loop of yarn as large as you need to, but keep in mind that more yarn will mean a longer tail at the beginning, and if you're knitting a hat where you want to use up as much yarn as possible, a much longer tail will use up some of that.

I hope this is helpful to you! Please do let me know if you use it or if you have other questions about it. Also, I'm still debating whether I should write up the full pattern for how I knit my hats with the swirl increases and decreases, so let me know if that's something you'd want.

Happy Friday, and have a great weekend!