Over the years, I've gotten used to December being a crazy month. Yesterday, though, it became a different kind of crazy. Shortly before 10 a.m., while I was out on my walk, I got a call from Rainbow's school. I immediately knew something was wrong -- they never call in the middle of the day for a good reason. When I answered, I got a recording telling me to check my email for "an important communication," which turned out to be a notification that they entire sixth grade had been exposed to someone who had tested positive for COVID and had to immediately go into quarantine. So I had to run home to pick her up, and she will be home until the 13th. Even though remote instruction isn't an option for her school this year, they're going to do it next week because the entire grade is affected. We're going to get PCR tests this morning, though she isn't experiencing any symptoms. The kicker here is that she was supposed to get her second vaccine shot tomorrow, but we'll have to put that off.

Edit: As of Saturday morning, we've received our results -- both negative! And the school has scheduled a vaccine clinic at the school for the girls missing their second shot this weekend. It's unfortunately on Rainbow's birthday (12/15), but it can't be helped!

On a happier note, she opened up her doubled hat last night and was delighted with it! Now we can be matchy-matchy! 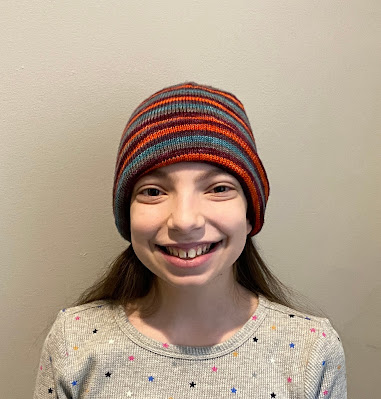 We will get test results back in 24-48 hours, so that means we're in for a quiet weekend at home -- and I have zero complaints about that! Rainbow suggested that we finally get to sewing the tote bags we bought supplies for over the summer, and I think that sounds like an excellent plan. Here's hoping your weekend is good and significantly less dramatic!