Phew, it's been a week! I was worried that coming back to work after a week off would be really stressful, but it turns out that I did so much work before my vacation that there hasn't been too much coming in this week, but it's been a long week nevertheless. It's been hot and humid here, and I've run four days in a row in that heat, so I've been falling into bed pretty spent each night and am looking forward to sleeping in a bit this weekend.

Last Friday I shared a peek into how I spent my week off, and you saw a photo of a sewing project. Today I want the share the results of that project, one that had been in the works for more than a year.

You may remember that during the first summer of the pandemic, Rainbow took a sewing class via Zoom. I was sitting with her during the classes so that I could help out if she ran into trouble, and I did a little sewing alongside her. That experience piqued my interest in learning to sew, and certainly I improved my minimal skills a bit when I managed to master cloth masks (remember the good old days when those were sufficient?). Last summer, when Rainbow finished school for the year, we decided we wanted to try another project that was a bit more challenging, and in a case of perfect timing, Juliann had just finished a Pepin Tote and assured me that we had the skills to handle it. So I bought the pattern, and Rainbow and I headed to a local independent fabric store to pick up the supplies. It then took us more than a year to get around to actually doing the sewing. In the end, it was a matter of just a few afternoons (and the third afternoon was because I got cocky and made a mistake that required picking out four seams). 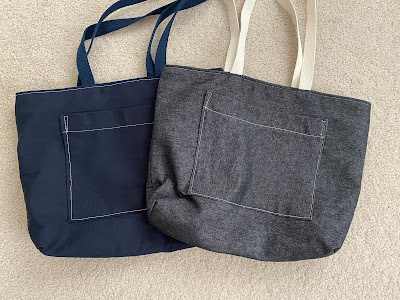 While these bags aren't perfect, we are so pleased with them, and they are functional, which is really what matters most. We sewed these bags side by side, with Rainbow sewing nearly all of hers herself (I did some of the trickier top stitching through multiple layers at the end). I'm sure those of you who are more experienced with sewing will be able to spot some mistakes and irregularities, but I'm feeling very proud of the fact that we made these and they look as they should!

Here's a peek inside the bags. Rainbow's has a floral pattern for the lining: 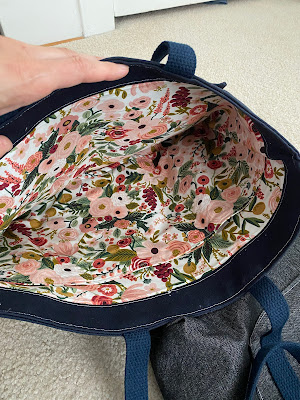 and mine has a knitting and crochet-themed lining: 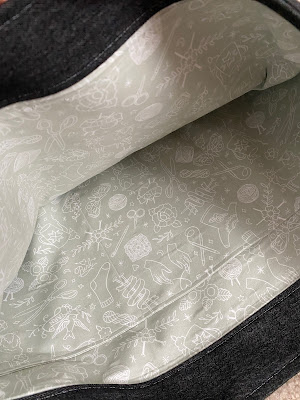 The one slight departure we made from the pattern was to make three interior pockets rather than two. Technically the pattern says you can make however many pockets you want, but the illustration shows two. We decided that if we did two, they'd be fairly large pockets, and even the three are fairly sizeable. 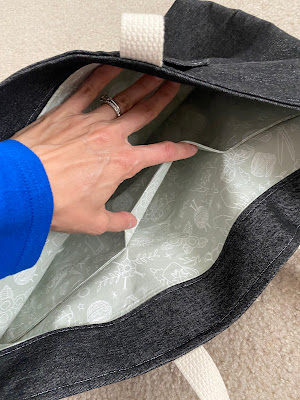 This project taught me a lot, most notably that if I want to continue sewing, I'm going to need to invest in a rotary cutter and cutting board; we made do with a ruler, a Frixion pen, and fabric scissors, but it became clear as we went along that our measuring was less than exact. But the pattern was excellent and the one mistake I made was entirely due to user error. I wouldn't hesitate to use it again or to recommend it. Rainbow has been using her bag nonstop since we finished them. Her bedroom is on the top floor of our house, but she spends a lot of her day downstairs, so she's been using her tote to carry all the stuff she tends to use during the day -- laptop and charger, Nintendo Switch and charger, her crochet project, and sometimes other things. I'm fairly confident that there are more sewing projects in our future!

This weekend we're hoping the thunderstorms hold off for my nephew's third birthday party, and Rainbow and I hope to do a little back-to-school shopping (we've ordered larger uniform pieces online but need to stock up on some school supplies). I hope your weekend is full of good things!