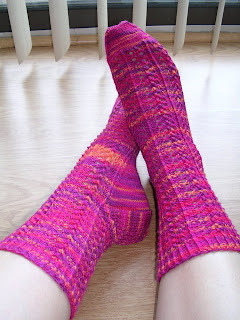 Although you probably can't tell by looking at them, these are fraternal socks. I made mistakes on both, starting with not transferring two instep stitches to the other needle before starting the gussets on the first sock. Instead, I kept these in the instep pattern, knitting the two edge stitches through the back loop. I couldn't figure out why I had more instep stitches than I should have when knitting the toe, and clearly I wasn't smart enough to read back through the pattern until I got to the same spot where the mistake was made in the second sock. This time I transferred the edge stitches but knitted them through the back loops so the socks would at least look the same. However, I encountered a puzzling number of stitches when I got to the toe, with the same number on the sole as on the instep, whereas I should have had more on one needle than the other. I didn't think it was worth it to frog both socks just to have them match the pattern and each other for a stitch or two, and frankly looking at the socks now I can't tell which is which.

I enjoyed this pattern and found it to be fun and well written, as are all of Cookie's patterns that I've knit in the past, but I won't be rushing to knit this one again. The reason? The gussets -- in a nutshell, they seem to go on forever. If you look at my left foot in the picture above, you'll see that the gusset decreases ended pretty much halfway down the length of my foot. I found the heel flap to likewise be extremely long (and also a little narrow), and while it fits fine, I'm not sure I like the look of it. I'll need to wear these socks a few times to form a final opinion of the construction of the sock; I already know I love the stitch pattern and the colors in this yarn.

Aidan's sweater is coming along nicely: 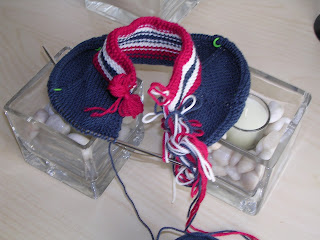 I suppose because Aidan lives in the Chicago area a couple of you assumed that he'd be a Cubs fan; only jenfromri correctly guessed that this would be a little Red Sox jacket! You see, what I didn't tell you is that Aidan's papa grew up near Boston and is a die-hard BoSox fan. He's also determined to make Aidan a member of the Red Sox Nation, even going so far to show him DVRed Sox games when he was only a few days old.

My plan is to repeat the striping of the neck at the sleeve cuffs and around the bottom, and the finishing touch will be to knit a tiny pair of Red Sox socks to sew to the front.

I started another pair of socks, as you'd expect. These are a somewhat boring pair in shades of gray for J: 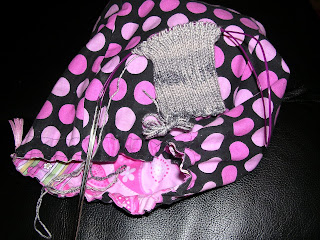 No, your eyes do not deceive you; I am knitting magic loop once again. Perhaps I was more enamored of this method than I let on.

Thank you for all your compliments on the Embossed Leaves socks! My future MIL's birthday is Sunday, so I am hoping to get these to her at some point this weekend. I'll try to remember to take the camera and get a modeling shot!

Finally tonight I leave you with an interesting tidbit about the wildlife I encountered while on the way to work this morning. First, I must tell you that we live in the suburbs surrounded by a lot of woods, and it's not unusual to see the occasional deer or wild turkey. But this morning, as I pulled out of my garage and up the driveway, I saw something strange at the side of the drive that I thought was a piece of trash. But it wasn't -- it was a turtle! Fortunately he was close enough to the edge of the driveway that I could maneuver my way around him and not run him over. Apparently he was not as confident in my driving abilities; I saw him tuck his head into his shell as I passed him.
Posted by Sarah at 6:36 PM