I'm not sure what's been in the water the past several days, but I have been finishing things like crazy. On Saturday, I finished up my cabled fingerless mitts, which have now been blocked and are ready to wear (which is ironic given that it was about 70 degrees today). 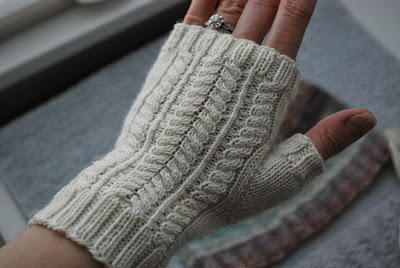 I wasn't able to get someone else to take a picture of both of my hands, but trust me when I tell you that the other mitt looks the same except for the fact that the thumb is on the opposite side. I'm still trying to decide if I should write up the pattern or if there's enough out there that looks similar that it wouldn't be worth it. If you have any strong opinions on the matter, I'll be happy to hear them.

As soon as I finished up the second mitt, I pulled out my Sople and finished knitting the first sleeve. Huzzah! I added some length to it so that it comes all the way to my wrist. Now I just need to find a quiet time to sit down and pick up the stitches for the second sleeve. I'm hoping that because I did the sleeve cap on the first sleeve three times I'll be able to do the second on the first try -- it seems like it should be easier now that I've had all that experience. My new goal for this sweater is Thanksgiving, which seems totally doable.

Once the sleeve was done, I cast on for a new handspun hat for Rainbow, which was finished by lunchtime yesterday. Here is is with the other mitt in the pair (though it's still a bit wet): 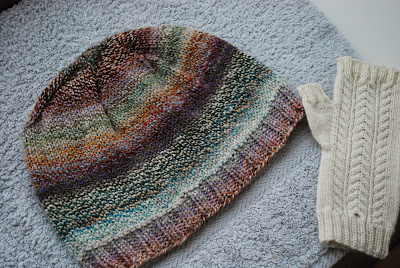 I have to weigh the leftovers and figure out if there might be enough for a pair of matching mittens. In the meantime, I started a new pair of basic mittens for the kid out of some deep purple Cascade 220. 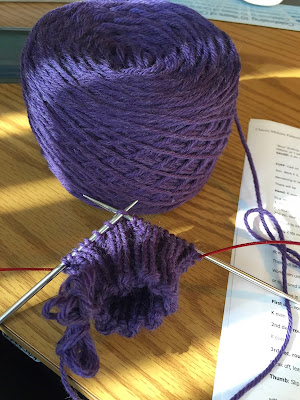 The pattern is Classic Mittens, the same one I used last year. She's still trying to wear those mittens, despite the fact that they're a bit too small, so I figured I should stick with what works.

Finally, though this isn't really done yet, I did the embroidery on the face of Rainbow's doll last night. It's not perfect, but it's better than I thought I can do. 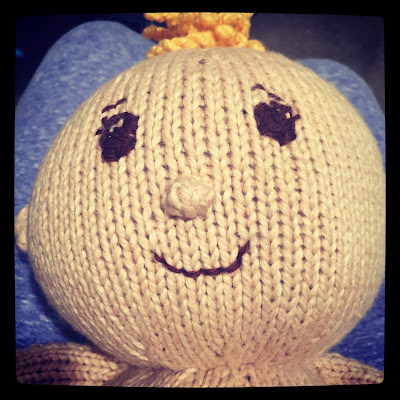 All that's left to knit is the hat (which is nearly done) and the dress. Rainbow's birthday is 35 days away, so I'm feeling pretty confident that all will be complete before then.

Before I end, I wanted to remind you that the Indie Designer Gift-a-long starts this Thursday, November 13, at 8 p.m. EST! The sale will run through the following Friday, November 21, at 11:59 p.m., but the KALs/CALs run through midnight on December 31. There's been a lot of chatter in the group already, so I encourage you to click over and check it out! As I did last year, I'll be interviewing some fellow designers on the blog and talking about what's happening in the group. I hope to see you there!
Posted by Sarah at 8:36 PM