It Must Be the Cold

While I am always happy to knit, I've been surprised by a real urge this week to Knit All The Things. I suppose I shouldn't have been too surprised -- after all, fall is a knitter's favorite season, and we had our first measurable snowfall (followed by bitter cold) the other day, so it's only logical that I would want to surround myself with wool.

It's been several years since I did serious gift knitting, but I am doing a bit of it this year. My brother-in-law got engaged a couple of months ago, so I'm making a couple of smallish gifts for my sister-in-law-to-be. I of course had to take advantage of the Gift-a-long pattern sale this week and bought the pattern for Bristol Ivy's Metropolis Mitts (among a number of other patterns for myself). I am knitting them out of a skein of handspun superwash merino that's been sitting in my stash for several years now: 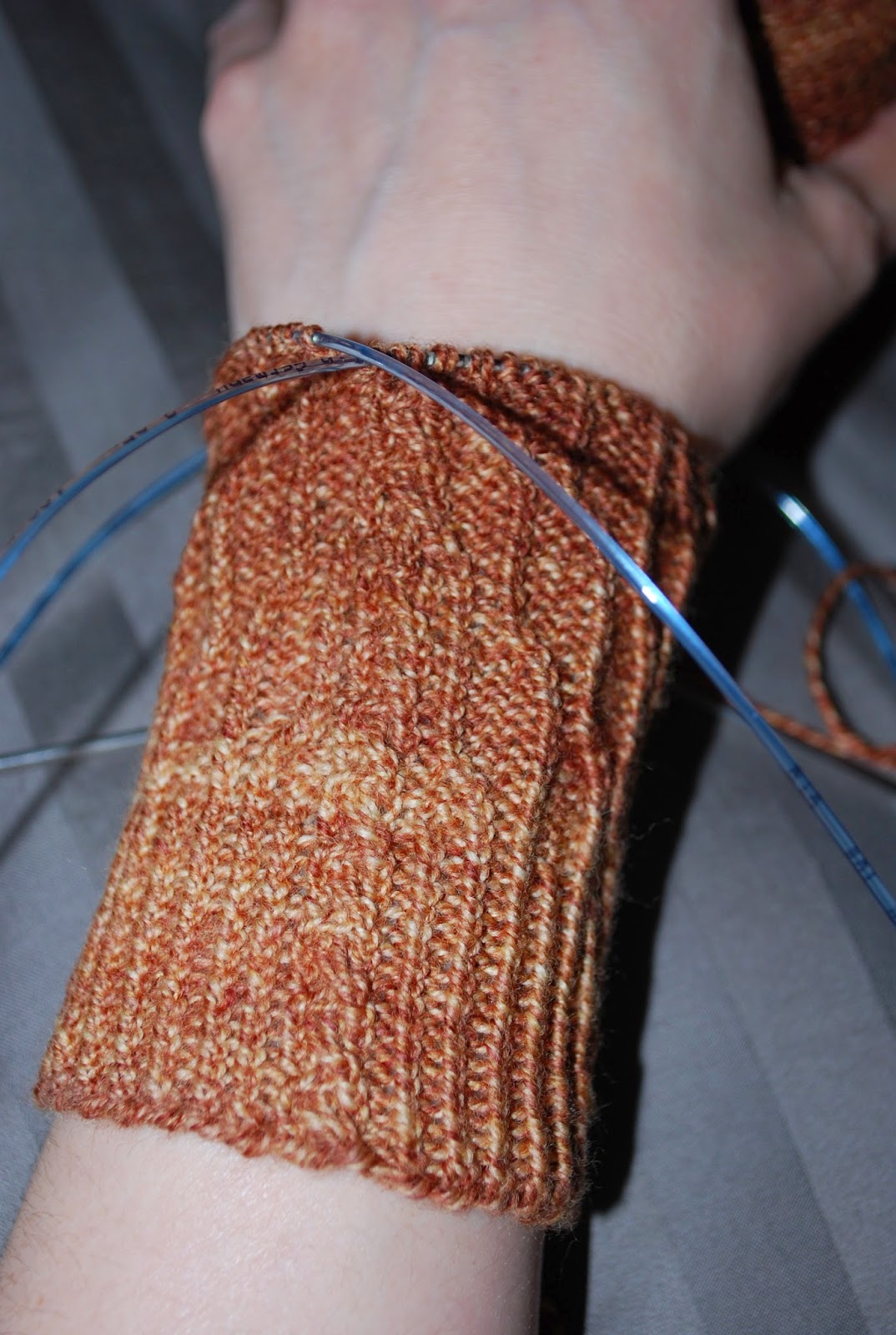 You'll have to take my word for it that these look a lot better in natural light (and when I'm not trying to take a photo of my own arm). These aren't really a quick knit -- there's lots of traveling twisted stitches and cables -- but they are a fun one. If I'm not completely sick of all the knitting gymnastics after I'm done with the pair, then I'll knit a pair for myself.

I'm planning on knitting a hat to go with the mitts, also in handspun (a skein that coincidentally coordinates quite well, I think): 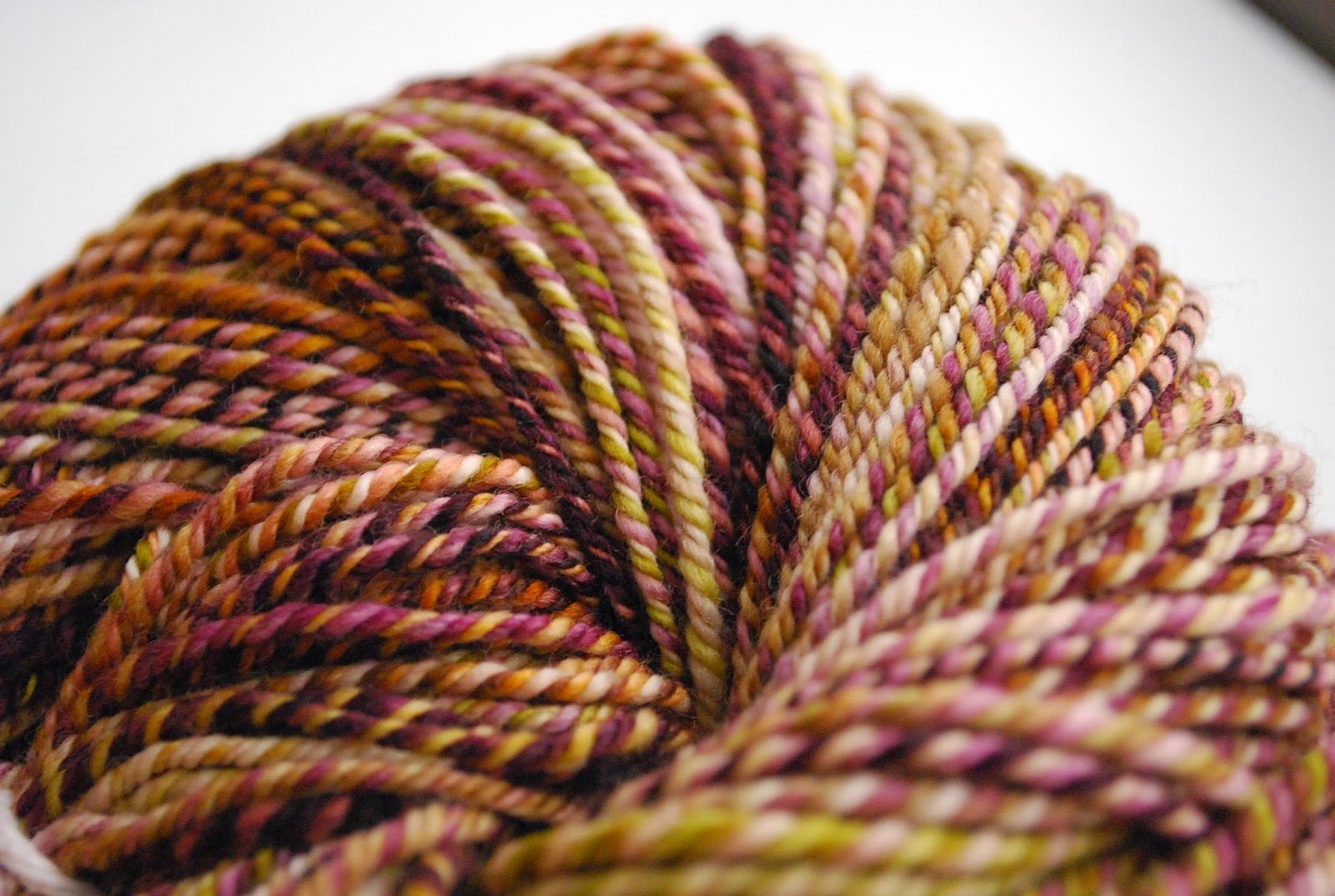 I'm going to make something up for the hat -- I'm thinking something slouchy with some kind of cables. I'll figure it out as I go.

I'm not casting on for the hat just yet because take a look at this -- the rest of this sleeve is all that's standing between me and a finished sweater: 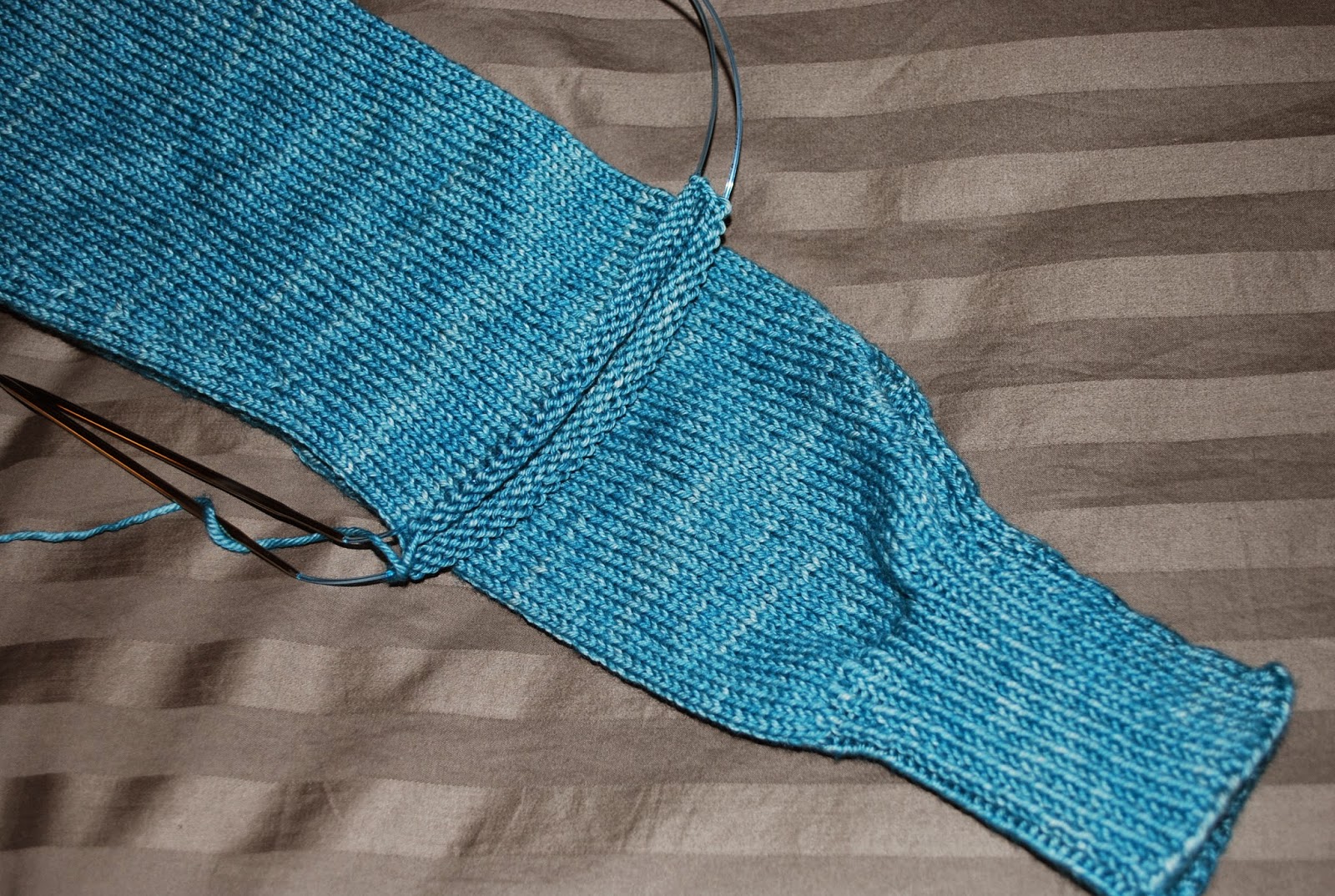 I should at least get to the cabled detail on the top of the sleeve (which you can't really see in the photo because of how the finished sleeve is folded) tonight, and I think I should be done before the weekend is out. The nice thing about this pattern is that you do the neckline and button bands before even starting the sleeves, so once I've bound off the second sleeve and woven in a few ends, the only finishing I will need to do is pick out and sew on some buttons! My goal for this sweater was to have it done by Thanksgiving, and frankly I don't think that's going to be a problem at all. The hard part will be deciding what to cast on for next -- there are too many things in the queue saying "Pick me! Pick me!"

Just a reminder that the Gift-a-long pattern sale (25% off all eligible patterns with the code giftalong2014) ends tomorrow at 11:59 p.m. EST. You can find my eligible patterns here. Once the sale is over, keep knitting with us in the group! There are literally hundreds, maybe thousands, of prizes to be won along with a lot of fun and encouragement in the group.
Posted by Sarah at 7:44 PM