Ever since I got back from MDSW, I've felt more like spinning than knitting. And that hasn't really been a problem, because there is plenty of fiber to be spun. This past week I finished up two skeins. The first was the other half of the fiber from the first batch of my Fat Cat Knits club shipment. This colorway is called Pepperspark, and like the first skein, I spun it into a two-ply fractal. I spun my singles a bit thicker this time around, so the skein is more of a sport to DK weight. 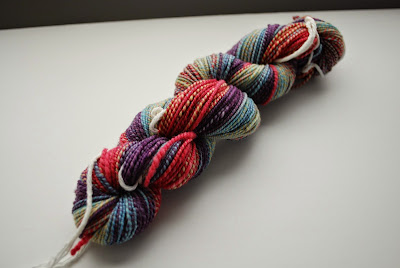 As with the first skein, I seem to have put a bit too much plying twist into this one, so it's not as neat and tidy as I'd like, but I do love the colors. 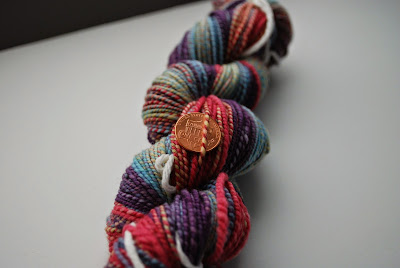 This skein is roughly 139 yards, which is a bit less than I was hoping for. Rainbow has requested that I make her fingerless mitts, however, so this might be enough. It will be a while until she needs them, of course, but I think it's a good plan.

As soon as that skein was finished, I sat down to ply the singles I'd finished on my spindle just before leaving for the festival. They were spun from an ounce of punis I'd bought from Gourmet Stash at the festival last year; this batch was a blend of superfine merino, merino, Seacell, cashmere, silk, milk fiber, and just a touch of angelina. Here's what they looked like before: 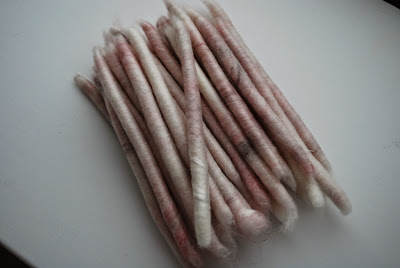 I spun very fine singles that plied into a laceweight, albeit an uneven one. 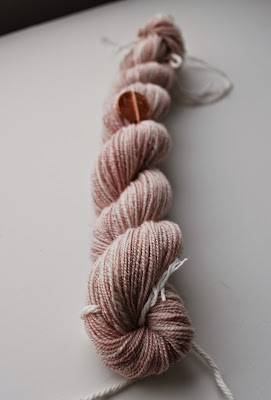 This skein may be tiny, but it's really luscious and soft. Seriously, I wish you could pet it through the screen. It ended up being pretty close in yardage to the other Gourmet Stash skein I spun -- 169.5 yards this time compared to 165 yards in the other. 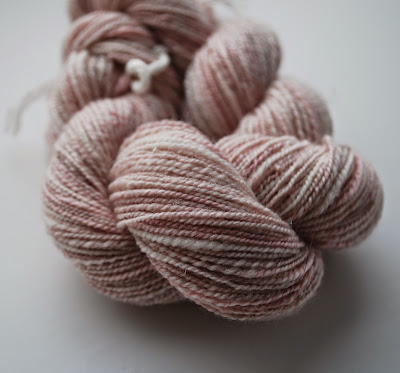 Today the Mister let me have a day to myself, for the most part (after he hosted the family and made us all a scrumptious lunch). He and Rainbow went out to do stuff, and I spent the afternoon spinning. I am working on the second batch of FCK fiber (the batch for me), and I'm spinning fine singles from Hungry Horace. The plan is to chain ply to keep the color progression. 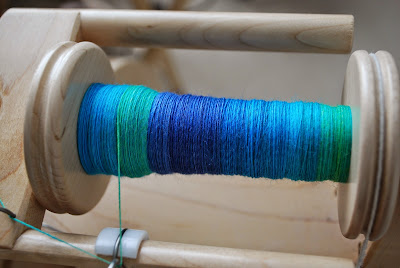 I actually put quite a bit more on the bobbin since I took this picture, and I'm planning on spending a bit more time on it this evening, so it's very likely that it'll be a finished skein the next time you see it!
Posted by Sarah at 5:09 PM