In case you were wondering, it is not really possible to hold an ice pack to your face and knit simultaneously.

I spent last Friday recovering from my oral surgery (gum grafts on two sites), and though I had high hopes of knitting all day, that didn't really happen (though I did get caught up on the DVR). I thought I remembered knitting a lot last time I went through this, but then again I only had one graft that time, on a tooth right at the front, so I think I spent the day after the surgery lying down with a bag of frozen peas leaning against my chin and my hands were pretty much free. This time it didn't work out as well.

I managed to squeeze in a round or two on my hat in between icing sessions, but I realized later that I didn't like how the pattern was knitting up and ripped back to the brim, so my net knitting progress was pretty much zero. Now, though, I'm trying something else and liking it much better, but I'll save a full reveal for when it's completely done (I hope by later in the week).

While I did spend most of the weekend spinning, I did pull my Airflow out and have worked on it the past two evenings. I finished all the back increases and have just a handful of rows left to do before I start the short row sections of the fronts. 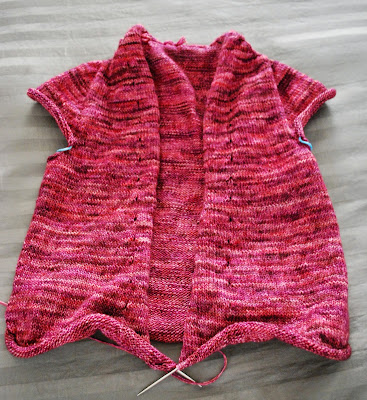 The one thing I'm not loving about this sweater is the front edges. I knew to expect rolling because it's all stockinette, but it might be a bit too much for me. I'm thinking about maybe picking up stitches all along the fronts and around the neck and doing something like applied I-cord. I'll wait until everything is done before making a decision, but it's something to think about.

Meanwhile, I finally wound a skein of yarn I bought at MDSW last year (Jill Draper Makes Stuff Esopus in Greyhound) for a new shawl, which will likely be cast on as soon as the hat is done. 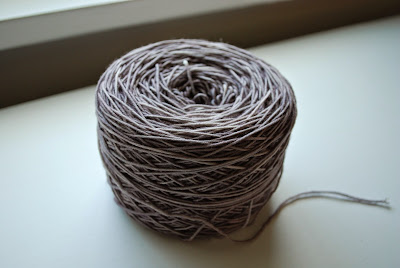 This stuff is super squishy and bouncy, so I'm hoping it'll work well for what I have planned. The skein is a whopping 500 yards, too, so it will make a nice big shawl.
Posted by Sarah at 7:14 PM