I've now had a full day to recover from the weekend, a weekend that was a lot of fun but not at all relaxing. We were up early and running around for much of both days, so it's no wonder I was about ready to collapse when I crawled into bed on Sunday night! It was a great time, though, and the weather was absolutely perfect, so I can't complain. But enough about that; you want to see the loot!

I was actually fairly restrained this year. I have a well-curated stash, so I didn't feel the need to go crazy. The only thing I had on my list was a maintenance kit for my miniSpinner, which I got pretty early on on Saturday. Other than that, my plan was just to stroll around the festival and see what was there, taking home things that really called out to me.

On Saturday, the focus was fiber. One booth I know I wanted to visit was Gale's Art. Last year, Gale had some gorgeous undyed alpaca/silk fiber that I had fondled on Saturday but not purchased, and it was gone when I went back to buy it on Sunday. I wasn't sure if she'd have it this year, but I certainly planned to check. Luck was on my side this time, and 4 oz. of incredibly luscious chocolate alpaca/silk came home with me. I even started spinning it Saturday evening. 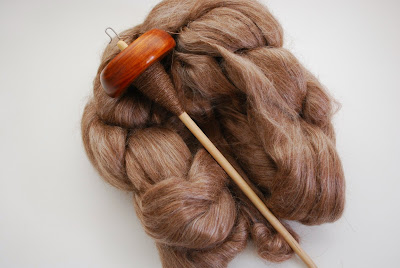 I also stopped at the Knitty and Color booth after having seen a preview up online. That photo showed a lot of bright colors, which appealed to me a lot given the socks I've been knitting. I've decided that my new thing when it comes to spinning sock yarn is going to be spinning sort of self-striping yarn, so I thought this braid would work very well. This is superwash merino in the colorway Ain't It Fun! 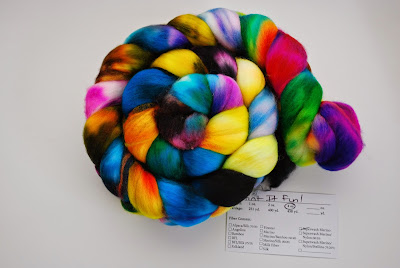 That 8 oz. of fiber was the sum total of my fibery purchases for Saturday (I also bought a small jar of Justamere Tree Farm maple cream, which is now residing in my refrigerator), so I decided that I really should buy some yarn on Sunday when we headed back.

The Miss Babs booth had been way too crowded to even approach on Saturday, but it was much more manageable on Sunday, so I snuck in and picked up a gradient set for a new design idea. The yarn is probably much prettier out of the bag, but I thought if I took it out, I'd never get it back in neatly, so I'll wait to take it out until I'm ready to wind and use it. 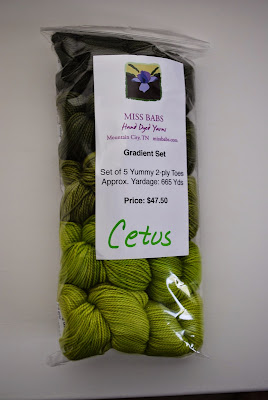 Finally, I made a stop at the Verdant Gryphon booth, where in the past I've often stopped to fondle but rarely purchased. This year, I decided it was high time a skein of Bugga came home with me (this one is in the colorway Persephone). 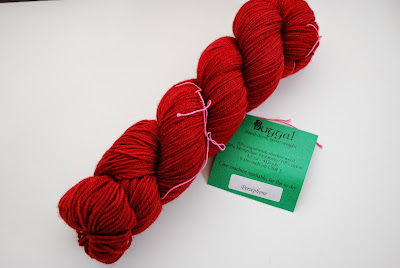 At least part of this skein is destined to become a Star Anise, a pattern I bought during the Giftalong last year but haven't yet knit.

All in all, I'd say it was a really good year. I could have gone crazy and bought a lot more, but I kept reminding myself about the size of my stash and restrained myself. Perhaps this year I'll actually manage to use what I bought before it's time for the next festival!