Somewhere in the Middle

I have been all about the spinning in the past week or so, and that means knitting, while it continues, has taken a bit of a back seat. Still, progress is being made, albeit slowly.

My main knitting project has been my Airflow, on which I'm somewhere in the middle. I'm partway through the back increases, and it's actually starting to resemble a sweater. Oh, and it fits, too. 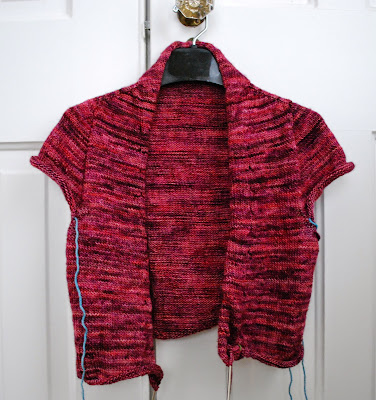 This project should get a lot of attention this Friday, when I'll be home all day following gum surgery in the morning (fortunately it's a relatively minor procedure, but I have to take it easy for a day or two afterward to avoid any bleeding issues). My plan is to sit and knit and catch up on the DVR for the day. I actually had the same procedure done a couple of years ago, and I spent my recovery time working on my Breezy Cardigan. Seems I have a bit of a theme going with gum surgery and lightweight sweaters.

My lunchtime knitting has been a bit boring. I had a fair amount of my handspun leftover after finishing the socks, so I decided to try to knit it up. I'm basically just knitting a tube (though I started with a folded hem), and I'll use it as a soft sunglasses case or something when it's done. 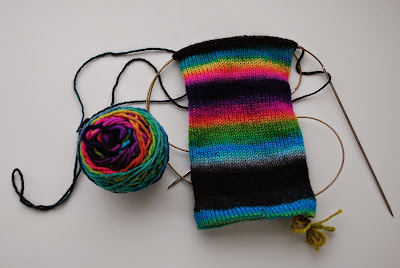 Not terribly exciting, I know, but it's something. I have to figure out something to knit next during my lunch breaks, and I'm tempted to start another pair of handspun socks (despite the fact that my sock drawers are full to bursting and I'll have to cull some older pairs to make room for the new ones first).

Did I show you the cowl I made while I was away for MDSW? I don't think I did. It doesn't have a name yet, and I only have the barest of notes for how I knit it, but eventually I'll sit down and put together a proper pattern. 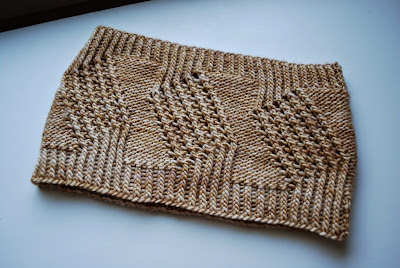 I knit this for the Madelinetosh Lovers Mad May original design contest. It's an idea I'd been thinking about for a while, so I figured this event was as good a time as any to try it out. I used a bit more than half a skein of tosh merino DK in Warm Mushroom, a skein I won in some event or other several years back. I think something may have been nibbling on it at some point, because I found several areas where the yarn looked a bit frayed (it's a singles yarn, so it looked like several fibers had been snagged). I'd like to make another version of this in a longer length -- more of an infinity cowl -- but I'll have to find some more yarn for it. I'm going to try to come up with another original design before the month is over, too, perhaps a hat. Stay tuned!
Posted by Sarah at 5:53 PM