Usually when I'm spinning, I'm anxious to get to the plying stage because I want to see the finished yarn. Lately, though, I've been more into spinning the singles and admiring them on the bobbin. Last week you saw the start of my Hungry Horace singles. They were finished up earlier this week. 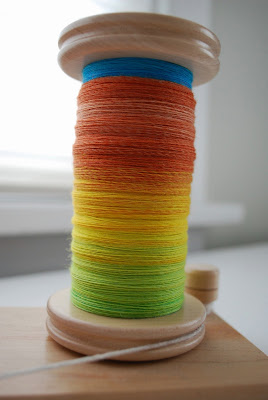 I really like this bobbin shot because you can see all the colors in the fiber at once. It's not a full rainbow, but it does have a lot of bright colors that make me happy.

As soon as those singles were done, I started in on the other colorway, Pepperspark. (In this pairing of colorways, Hungry Horace is supposed to be the caterpillar and Pepperspark the butterfly.) This colorway has fewer shades -- deep purple to blue to a bit of greeny yellow to dark pink -- but I love it just as much. 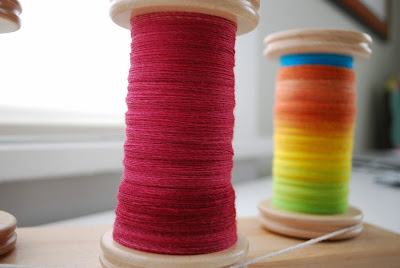 My plan for both of these bobbins is to chain ply to preserve the colors, but as I was finishing up the second bobbin, it occurred to me that it might be fun to spun up a bunch of bobbins of singles first and then do a marathon plying session of all of them. It works out well because I've also decided to chain ply my most recent Fat Cat Knits shipment, a duo called After the Fire and New Growth (you can see the fiber in this entry). As the names imply, the colors look like ashes and charred trees left behind after forest fiber and the beginnings of regrowth, respectively. Because I got the sock blend fiber (superwash merino and nylon), I thought it would be fun to spin two skeins that would more or less match for two somewhat-matching socks that transition from one colorway to the other. So I split each braid in two down the middle and rolled them up into two balls of fiber. 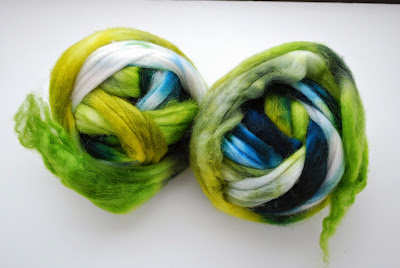 The plan is to spun up both batches of fiber and then start chain plying all four bobbins. With any luck, I'll be able to start the plying (or at least be getting close to it) by next weekend.
Posted by Sarah at 7:42 PM