This weekend has felt decidedly fall-like (I even had to break out some hand-knit socks to wear!), so naturally I want to knit and spin all the things. I honestly wish I had twice the free time each night so that I could spend two hours knitting and two hours spinning -- it's hard to ignore one in favor of the other!

I did spend Wednesday and Thursday evenings at my Lendrum finishing up the second (and final) bobbin of singles of my Southern Cross Fibre South African superfine/silk. 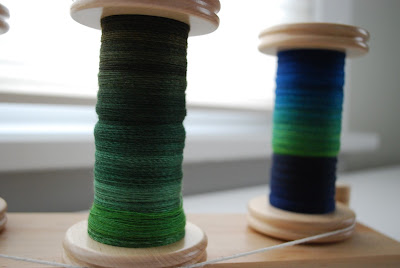 The camera couldn't capture the shine of these -- 50% silk makes for some really shiny yarn! I've started plying these on the miniSpinner in the interest of time, though I can tell I will be in this for the long haul -- laceweight just doesn't happen quickly, even with an electric wheel! 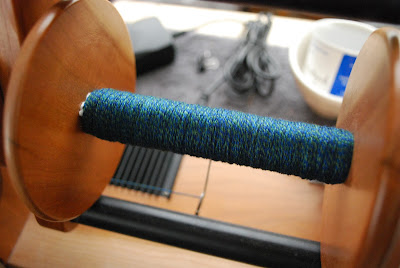 On Saturday morning I got a nice surprise in the form of a big box on the front stoop. Actually, it was delivered Friday, but as we usually come in the back door, we didn't see it. Luckily the Mister thought he'd remembered seeing a box at the front the previous evening and opened the door to check. It had been raining for much of the night, so the box was wet, but fortunately the contents were dry. Inside was a Rambouillet fleece that I'd bought at MDSW back in 2012 and finally sent away to a mill to be processed into roving. This was a gorgeous surprise on a gloomy Saturday morning: 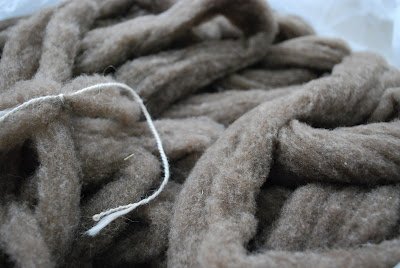 While the Mister was putting Rainbow to bed last night, I wound the roving up into individual bundles of about 2 oz. each (in case you're wondering, that string is tied to the end -- it's all one long strip of fiber in the bag). The fleece was about 4 pounds, if I remember correctly, when I bought it, and after washing and processing, I ended up with just shy of a pound and a half. Some weight was obviously lost in the lanolin and dirt that washed out, but I also have a small batt that I carded up on my own as a test before I sent the rest off. I reserved 22 oz. for an actual process, and I'm using the remaining bit (about 1 5/8 oz.) to do some sampling. 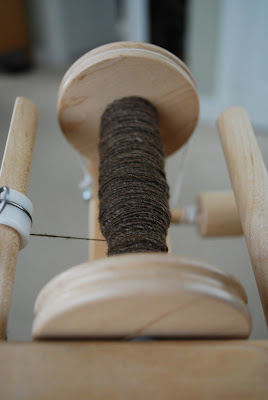 This was a fine fleece with a relatively short staple length -- certainly too short to comb -- so I expected that the roving would be a bit neppy. The singles that I'm spinning aren't particularly smooth, but I think the finished yarn will have a nice tweedy texture to it. I'm thinking that a three ply will work out best, but I'll ply up some bits of the sample and see what I like. I'm hoping to get a sweater out of this fiber if I can.

Finally, I got another fibery surprise this week when a package arrived from Australia. I'm expecting my next SCF club shipment any day now, but this was my prize from Tour de Fleece (which David was kind enough to everyone who participated on the SCF team and posted a finished skein). 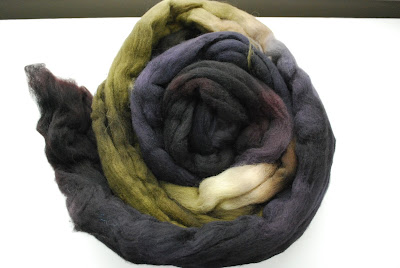 The bag this came in was labeled "International Wool of Mystery," so I have no idea what it is. I'm pretty sure the colorway is Vetinari, which was one of the Mega SAL colorways, or at least a sibling of it, but the fiber is definitely a mystery. It's very soft, though, definitely soft enough to wear comfortably against my neck, so I'll keep that in mind when spinning it.

It certainly looks like there will be a lot of time spent at my wheel in the weeks ahead!
Posted by Sarah at 4:09 PM