I have spent the last couple of days knitting furiously on a swatch for a submission, which of course I can't show you (though you'll see it eventually in some form, I'm sure). It was knitting that needed to get done, but it doesn't make for very good blog fodder.

Since finishing the handspun socks and the swatch, I've brought my double-knit cowl to work for my lunchtime knit break. I'm hoping that the little bit of extra knitting time will help me get it done soon; though I've gotten faster at the technique, I'm still knitting twice the stitches that I would for a regular cowl of this size, so it does take time. I'm still entertained by it, though, so my urge to finish isn't out of ennui but rather excitement to have a finished cowl! 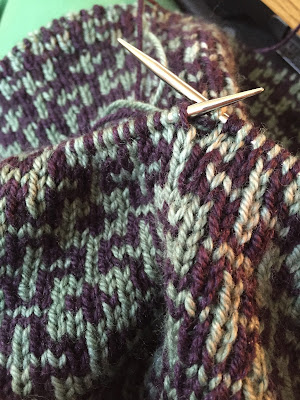 In case you are not familiar with double-knitting, allow me to explain. This is a technique that gives you completely reversible double-thick fabric. You do it by working with two colors of yarn (always held together) and working in pairs. The first stitch of the pair is always knit and the second is always purled, and if you work the first stitch in color A, you'll work the second in color B (and vice versa). It sounds rather complicated, but in practice it's fairly straightforward. If you can knit 1x1 ribbing, you can do double-knitting. I'd highly recommend Alasdair Post-Quinn's Adventures in Double-Knitting Craftsy class if you're a visual learner like me.

I'm hoping to spent a fair amount of time knitting and spinning this weekend. My brother-in-law is getting married next weekend, so this weekend is the last bit of calm before then. The weather is also supposed to get significantly cooler and more fall-like, so I really do need to get moving on Rainbow's sweater and perhaps even start one for myself!
Posted by Sarah at 5:45 PM