It's Tuesday, right? Going away for the weekend and taking two day off from work has thrown me for a loop -- I've been forgetting what day it is all day. I had hoped to get a post up on Sunday, but by the time we got home, ate dinner, unpacked, did laundry, and got Rainbow to bed, I was about ready to pass out. It's just as well, because I didn't have much spinning to show anyway.

The weekend away was a lot of fun, even if I didn't get as much knitting done as I'd planned. Though I'd taken an extra skein of sock yarn along just in case, I didn't need it. I managed to finish only one sock (which was already half done when we flew in), and that was done in the car on the way to the airport to get our flight home. I quickly Kitchenered and wove in my ends so that I could stow my little tool bag in my checked bag -- I did not want to risk losing my pretty bird scissors -- and promptly cast on for the second. What you see here is the result of knitting at the gate while waiting to board and during my lunch break today. 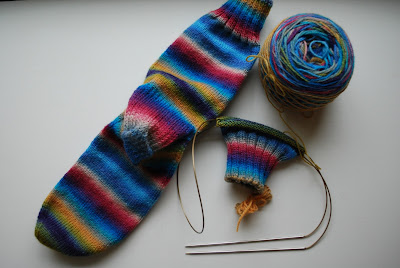 It looks like I'll have a decent amount of yarn leftover when the second sock is done. I'll have to weigh the leftovers to see just how much, but it's possible I might get a short pair of socks for Rainbow out of what's left.

I did a bit of knitting on my double-knit cowl last night, and I'm close to finishing up the first pattern repeat. The pattern is finally starting to emerge, and it's exciting to see that it works in yarn as it appeared to work on paper. 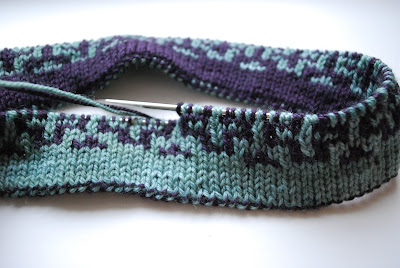 I don't know if I mentioned that the yarn I'm using is Yarn Hollow Tango, a luscious blend of 85% Polwarth wool/15% silk. The Ravelry page for this yarn says that it comes in a put-up of 662 yds./605 m per 7.97 oz./226 g, but my skeins are labeled 4 oz. and 330 yards. Considering this is a DK weight, that's still pretty generous yardage. The yarn is really delightful to knit with, too. The silk adds a bit of sparkle, and I'm pretty confident that when I block the cowl I'll be able to get some additional length and drape from it.

Rainbow started kindergarten today (can you believe it?), so on my to-do list tonight is typing up the instructions for her school sweater. It's likely to be a while until she needs it (her only complaint about her first day was that she got all sweaty from playing on the playground), but I'd like to get started. I'm sure it will be sweater weather before I know it.
Posted by Sarah at 7:36 PM