Still here, still sick. I stayed home from work again today (that's three days in a row, if you're counting, though the first two were already scheduled) because I'm still completely congested and, in a delightful twist, I seem to have developed bronchitis, which means I've been up half the night coughing. I'm not looking very pretty right now, let me tell you, but I'm hopeful that I'll be able to go back to work tomorrow. I'm on some meds for the cough that I've had before and that worked, so I'm guessing that I'll be back to my normal self in a few more days.

I will say that as not fun as being sick is, it does make for some good crafting time, especially when all you can really do is sit around and watch TV. Today I finished plying up a skein of handspun while catching up on video podcasts, and then I binge-watched some episodes of Poirot on Netflix while I finished a sample for a commission (which, sadly, I cannot share here). But finishing that meant that I can start some new projects.

For starters, I need to knit a new sample of my Hermia Hat and Mitts, which appeared in Knit Now earlier this year. The rights are coming back to me and I'm preparing to launch the patterns in my Ravelry store. When I knit the original samples, I was in a hurry because the yarn was very late in getting to me, so I didn't have time to take some modeled photos before I sent them across the pond. So now I'm going to try to knit another set (and thankfully I have enough of the original yarn leftover that I should be able to just make it) in a jiffy so I can get the patterns up soon.

Meanwhile, remember that crochet project I showed you last week? It is no more. I decided I didn't like where I was going with it, so I ripped it out and have cast on for the purpose the yarn was originally intended for: socks. 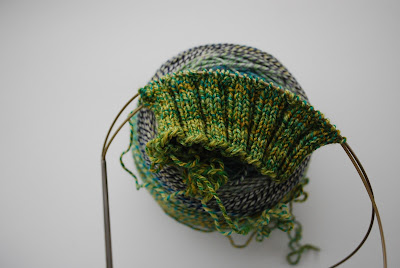 I started the first one on Sunday, while I was sitting around in between wedding preparations, and got about an inch and a half of cuff done. This yarn is superwash Targhee, and I have no idea how it will hold up as a sock, so these will be a bit of an experiment. I'm knitting at my usual dense gauge (approximately 9 stitches per inch using US 0/2.0 mm needles), but I'm not sure how this fiber behaves in high-friction environments. We shall see!
Posted by Sarah at 8:25 PM