The Good and the Bad

This week's knitting is a bit of a mixed bag. On the plus side, I'm making good progress in my Hermia set sample re-knits. The hat was finished (but for pulling the yarn tail through the last of the stitches at the top and weaving in ends) during my lunch break today. I would have finished up the last bits as well had I not forgotten to put some tapestry needles in my project bag. Whoops. But luckily those last bits are very quick to do. 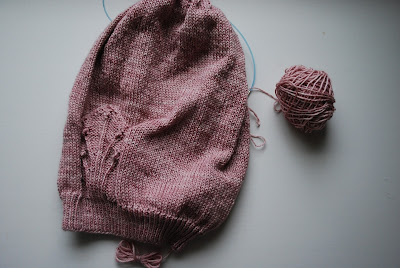 I also got a start on the first of the mitts, which will now be my main focus. I know it doesn't look like much, but these should move pretty quickly. 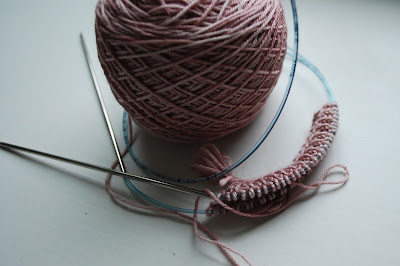 On the down side, I have some somewhat sad news to report. I think I mentioned last week that Rainbow had worn her school sweater for several days and was quite happy with it, but of course as we came to the end of the week, it was due to be washed. Despite the fact that I followed the yarn's washing instructions, I am sorry to say that it shrank in the dryer. It's not unwearable, but it just fits her now (meaning she's lost the extra room that would allow her to continue to wear it as she grew). I'm going to hand wash it the next time it needs to be cleaned and try to block it out a little bigger, but I'm not counting on it. This kind of thing is always frustrating, though thankfully this is an instance where it did not take me that much time to knit the sweater. Still, I hate to have invested time in something she will only wear for a few months. I guess I should have followed my intuition and hand washed, even if it would have taken extra time. Next time, I'll know better.
Posted by Sarah at 7:31 PM