Not Quite as Planned

I really had every intention of spinning this weekend. I had hoped to finish up the second bobbin of my Southern Cross Fibre Eider wool so that I could spin this week, but all I managed was about 45 minutes on Friday evening. Boo. Here's what the bobbin looks like -- it's a good start, at least. 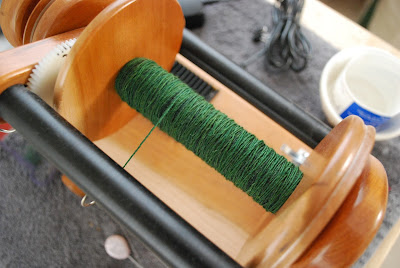 This colorway is called Water, and as you'd expect, it's a mix of greens, blues, and deep purples. I don't think I ever posted a photo of the completed first bobbin, so here's one to give you a sense of how much more I have to spin: 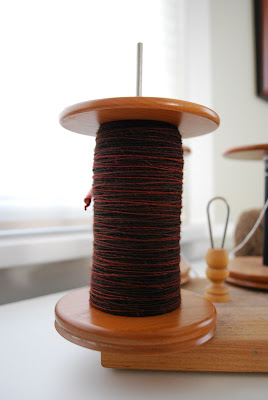 While there was little spinning this weekend, there was some fiber! After waiting for it all week (thanks, USPS!), my first shipment for this round of the FatCatKnits Mixed Blessings club showed up with the mail on Saturday. It had been shipped on Monday, and only from one state away, so it was a bit of a mystery as to why it took so long to get here.

The theme for this edition of the club is Famous Couples, so each shipment contains two colors inspired by a pair of characters. This month, the pair is Sam and Dean, the brothers in the TV show Supernatural (a show whose existence I'm aware of but have never seen, mind you). I'm trusting Ginny to know how to represent these two. 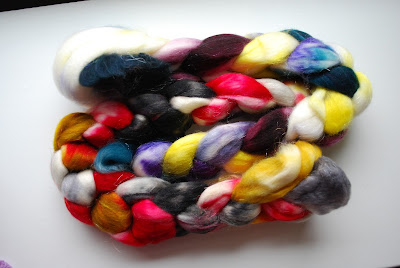 It had been long enough since I signed up for the club that I'd forgotten what fiber blend I'd picked! This is superwash merino/nylon sparkle, which should be a good sock blend. I think I'm going to try spinning this as a two-strand chain ply -- basically the idea is that you hold the two strands together to ply but alternate which strand forms the next loop. The result is a sort-of four-ply yarn. I think that should give me some interesting blending of the colors and some new spinning skills.
Posted by Sarah at 7:47 PM