Having a Gold Experience

Even though I'm supposed to be working on a pattern sample, last night I gave in to the siren call of the Dream in Color Classy and cast on for my Wood Hollow Mittens. I'm knitting these as part of the mitt-along for my LYS. 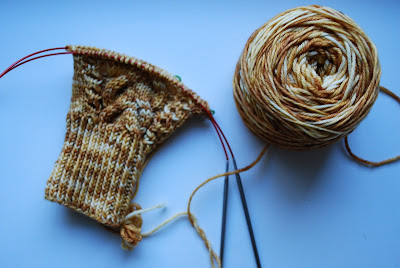 I didn't make a ton of progress, but I am nearly finished with the thumb increases. These will be a nice change of pace when I need a break from sample knitting, and I'm going to need them before too long (can you believe it's almost November?). Thus far I have been managing with fingerless mitts in the morning, but there have been a couple of times that I've needed to shove my hands in my pockets for extra warmth. I'm not exactly looking forward to mitten weather, but having a new pair to wear when it is time will be a positive side to it.

Speaking of fingerless mitts, I did finish up the second Hermia Mitt the other evening and blocked both mitts and the hat last night. It never ceases to amaze me how a simple soak in some water and a bit of patting into shape can really transform knitting. These were in such bad shape before, but there were some uneven stitches here and there, and now they generally look more polished. I'm hoping to get a photo shoot in sometime this weekend so that I can start putting all the pieces together to publish both patterns in my Ravelry shop. 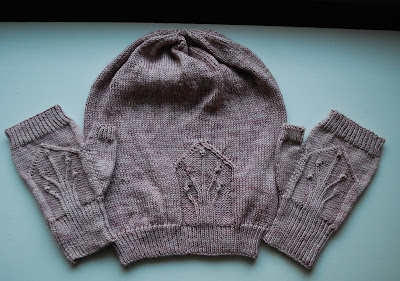 I am very much looking forward to the weekend; it's been a long week, and I could use some downtime. I have a bunch of prep to do for Indie Knit & Spin, which is coming up in only two weeks. I have almost everything ready to go, including hard copies of nearly all my patterns to put into my portfolio, but the big chunk of work that's left to do is labeling all the handspun skeins that I'm bringing to sell. I'll admit I surprised myself by how much there is when I pulled all the skeins out. I bought a big plastic bin at Target last week to put them in (for easy transport), and at the moment it's overflowing. Many of the skeins are in individual plastic bags, so I'm hoping once I pull them all out and get them a bit more organized, they'll fit. This isn't a difficult task but it is taking some time, especially because I need to remeasure some of the older skeins due to the fact that I've changed to a more accurate way of measuring yardage since then. My hope is that I can get a decent amount done this weekend and next, and maybe I can do a few skeins here and there during the week. I will post some previews as the event gets closer!
Posted by Sarah at 6:01 PM