Normally, as you know, I blog about spinning on Sundays. Yesterday, however, was not your normal Sunday. One of my best friends got married, and I was in the wedding, so it was a day that started at 7 a.m. and didn't end until we got home at about 10:30 last night. (On top of this, I seem to have come down with either an allergy-induced sinus infection or the cold that's been making its way around the office, so that long day came after a night when I only managed to get about four hours of sleep.) In any case, I'm playing a bit of catch up today, so we'll just pretend that this is what I would have posted yesterday.

I was home with Rainbow today and will be home with her again tomorrow (her school is closed for teacher in-service days, but they've come at a handy time as I'd likely have taken off today at least to deal with whatever this sickness is), so because I wasn't good for much else, I spent a couple of hours at my miniSpinner, plying my Southern Cross Fibre Eider wool singles. I think I'm just a tad past being halfway done. 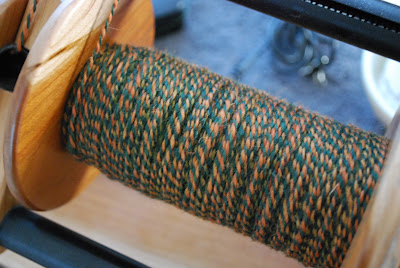 I'm plying the two different colorways together here, so there is a lot of barberpoling going on. It looks like the finished yarn will be in the DK to worsted range once it's washed.

Speaking of SCF, my September shipment showed up last week. Once again I couldn't resist getting both colorways, so I have double the fiber going into the stash. This month's fiber offering was Bond, and the colorway David picked out for me was Esmerelda: 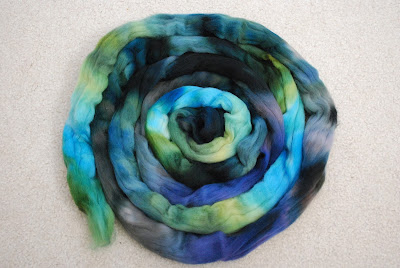 The other colorway is called Land Under Wave: 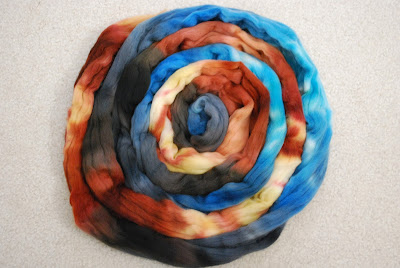 I have limited experience with Bond, so I'm not sure if it would be good for socks, but I might give it a go. I think Esmerelda will look lovely as a traditional three ply and Land Under Wave would be fun as one of my pseudo-self-striping yarns. Clearly I need to spin a lot faster if I'm going to have any hope of keeping up!
Posted by Sarah at 5:21 PM