I have been on a spinning kick this weekend, and I have finished yarn to show for it! After finishing up the third bobbin of Starry Night Cheviot singles during the week, I spent nearly all of Friday evening and a bit of Saturday morning plying them all. Though the finished yarn turned out a bit thicker and with less yardage than I was hoping, I am nonetheless delighted with it.

I didn't fully expect to get distinct stripes from the way I spun my singles, but I quite like how there are areas of one color and areas of subtle overlap. I'm pretty sure that when I knit this up, I'll get blurry stripe-like areas. 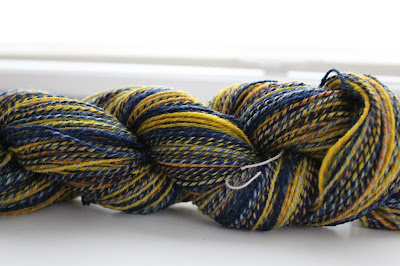 After washing, it appears to be roughly sport weight, and it's around 280 yards. I think that should be enough to knit up a pair of shortie socks, and if I divide the yarn first and knit toe up, I'll be able to knit until I'm out of yarn.

Almost as soon as I finished up this skein, I threw the next thing on the wheel -- some incredibly bright and shiny fiber that Rainbow asked me to buy and spin up for her at Indie Knit & Spin in March. I'm very nearly done (and actually will likely be finishing it up after I post this). 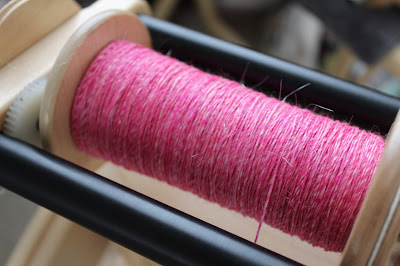 This is Raindrops on Roses from HipStrings, and it's actually a very interesting fiber blend (as you would expect): 62.5% Merino, 12.5% viscose from roses, 12.5% viscose from bamboo, and 12.5% nylon. I am spinning the whole thing onto one bobbin, and then I'll determine whether I'll wind it off with my ball winder and ply from both ends or chain ply. The latter is likely to cause fewer problems, but I'll get more yardage from the former. Fortunately, I want to let the singles rest either way, so I have a bit of time to ponder. And maybe by this time tomorrow, I'll have another finished skein!
Posted by Sarah at 8:00 PM