As much as I love a long weekend, I will say this: It really messes with my sense of time. All day today I've kept having to remind myself that it's Tuesday, not Monday, and that (as such) it's a blogging day. I didn't want to forget! Fortunately I have been looking at the calendar enough today to have remembered.

It was a busy weekend but also a relaxing one. The Mister had been on a work trip all last weekend, so there was the usual catching up to do on laundry and things like that, but having another adult around the house meant that I got some extra time to myself. I was able to go for a run on Saturday and long walks on Sunday and Monday, so I got lots of steps in. When I posted on Sunday, I forgot to mention that while I was doing all the laundry (something like five loads) on Saturday, I also managed to finish washing the rest of my fleece. And of course there was plenty of knitting and spinning time.

The second accomplishment of the weekend (after finishing up the fleece washing) was finishing the first sock in the new pair. I'm very pleased with how it turned out, and the pattern is already with my tech editor as I work on the second sock. 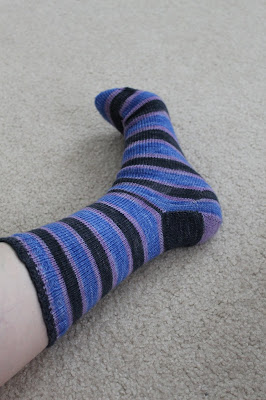 My handspun Boxy has also seen a fair amount of attention while the Mister and I have been trying to get caught up with a couple of shows that we watch but that we can never seem to watch when they're actually on. I've reached about 14 inches of body and have switched over to second color shift -- the yarn is now two plies blue, one ply purple. 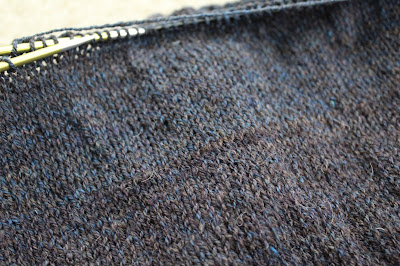 I held up a measuring tape to my body last night, and I think I'm going to aim for about 20 inches in body length total. That should bring the body down below my hips, which is a length I'm much more comfortable with and that's more suited to my tendency to run cold. Given how long this second skein of yarn is lasting, I think I might skip the blue-only skein and go straight into the darker-blue-to-light-blue fourth skein. I might end up having to break it apart into each fade segment so that I can split them in half when it comes time to work the front and back separately, but I'll deal with that when I get there. After all the time I spent spinning for this sweater, you bet your wool I'm going to do what it takes to make it come out exactly as I want it!
Posted by Sarah at 6:04 PM