Back in My Happy Place 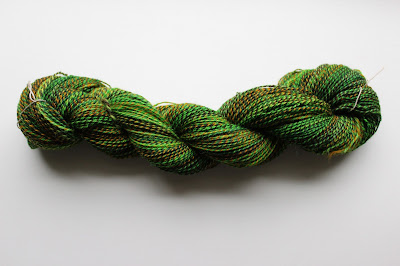 It turned out well but a bit low on the yardage, at only about 250-ish yards. I expected it to be lower than my usual, but it was much lower than I expected. It is perhaps a tad overplied, so I might run it back through the wheel to remove some extra twist, but that wouldn't give me much more yardage. I suspect it's mainly the wool, as it was a coarser, heavier wool than I'm used to spinning. Still, it feels good to spin up something from the stash. This skein will either go in my Etsy shop or will be used to make some shortie socks.

Next, I decided to tackle one of my Rhinebeck purchases, some Cheviot from Classy Squid Fiber Co. in a colorway called Starry Night. I was pondering how to spin it to keep the colors fairly distinct and was all set on chain plying when I laid out the fiber and found that if I tore it in thirds widthwise, the colors lined up fairly well. So that's what I did, and to create shorter color sequences, I split each third in half lengthwise. Now I can spin a traditional three ply and have more or less distinct color sections. 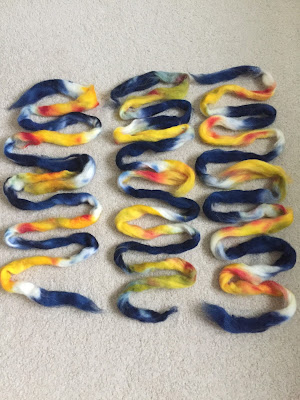 I'm about halfway through the first bobbin of singles and already love how it is spinning up. 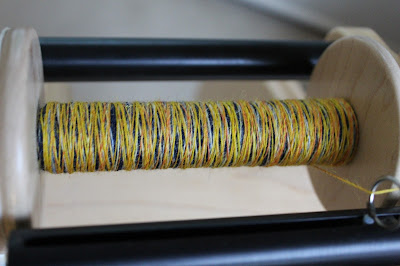 I've currently got the first batch of my Maryland fleece soaking and hope to have some to play with this week!
Posted by Sarah at 2:08 PM