You may remember that when I released last month's sock pattern, I noted that it was the first in a planned themed collection. I'm excited to release the second pattern in the collection today, and you might think it looks a little familiar. 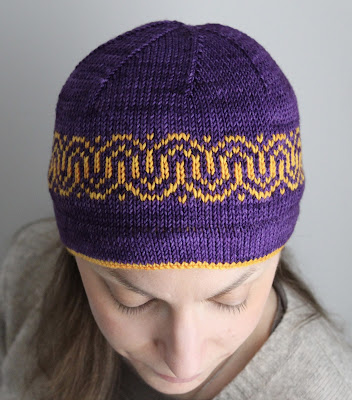 My Undamo Hat uses the same stranded colorwork motif as the socks and even the same colors, though this pattern is worked up in a fantastic DK-weight yarn, Marianated Yarns' Playtime DK. This yarn is 100% superwash merino and has a cabled construction, which means if you pull it apart, you'll see that it's composed of four strands that are themselves two-ply yarns. This type of construction creates a really round, really bouncy yarn with incredible stitch definition. Although it's not the typical yarn used for stranded colorwork, I think it works really well.

This hat is worked from the bottom up, starting with a hemmed brim. The inner facing of the brim is knit in the contrast color, as is the purled turning row, which gives that nice pop of color around the edge. The band of colowork makes the body of the hat move very quickly, and the crown is finished off with spiral decreases. 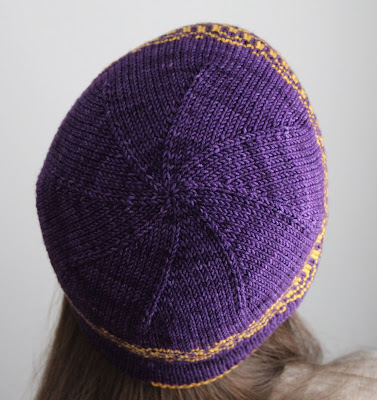 I've graded the hat to five sizes, baby through adult large, and every size of the pattern requires less than a full skein of a typical DK-weight yarn, making this hat great for using up partial skeins and leftovers. I don't know about you, but usually at about this time of year, I find a bag full of leftovers and partial skeins of projects I've knit over the winter, and this seems like a good way to use them up rather than shoving them back in the stash and forgetting about them.

Now I'm pretty sure I know what you're thinking (especially if you're in the Northern Hemisphere like me): It's finally spring -- why would I want to knit a hat now? Personally, I find hats to be great projects to work on during the normal months because they don't require having my lap covered in wool while I'm working on them and I feel very virtuous when we get our first cold day in the fall and I'm all prepared with a brand-new hat. Plus, isn't the summer a great time to get a head start on the holiday knitting?