I am one of those weird person who is perfectly happy knitting stockinette in the round for just about forever -- it's easy and mindless knitting, and I'm pretty fast at it. That said, I do occasionally like a little variety, but in looking at my current projects, it's all about the stockinette.

My main project is my handspun Boxy, which I started on May 1 and worked on a ton last weekend. I knit on it pretty much the whole way down to Maryland on Friday and the whole way back home on Sunday, plus I put in some time on it on Saturday evening while we watched the hockey game and on Sunday night while I cried my way through the season finale of Call the Midwife. It's actually a bit longer than it looks here but that hem is flipping up as you'd expect (I'll show it who's boss when I block it). 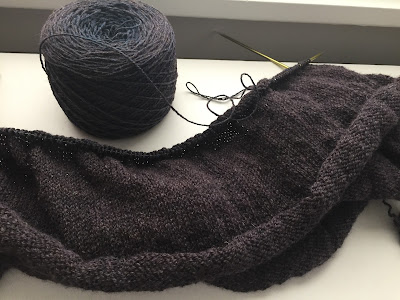 I have gotten through the first skein of yarn and joined in the second, but I actually wound off quite a bit from the second skein in order to get to the part where it starts transitioning from purple to dark blue. I was surprised that my first 350-ish-yarn skein got me about 6 inches of fabric, and while I will likely add some length to the body, I was starting to worry that if I knit up all the yarn from this skein, I wouldn't get to the lightest color in the gradient. I think what I wound off was less than 100 yards, so I still have a pretty sizeable skein to work with (we're talking 500+ yards). When I get toward the end of the skein, I'll see how much fabric I have and determine whether I'm going to use the dark blue-only or go right to the dark blue to light blue skein.

The other stockinette project is my sock blank socks, and I'm nearly finished with the first sock -- I just started the toe. 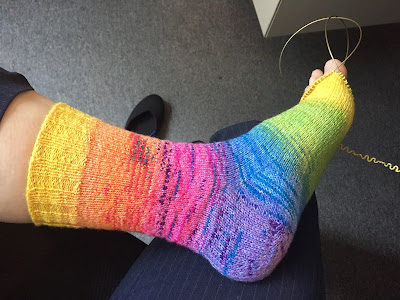 This one has gone much faster than I expected, considering I wasn't really feeling like I was in a rush to get this pair done. It looks like I should have a fair amount of yarn left in the blank, so provided it's enough, Rainbow should be getting a pair of ankle socks out of what's leftover.

I'm very much looking forward to the weekend ahead and getting a chance to sleep in a little. We only have plans to get together with family for brunch on Sunday to celebrate Mother's Day, so I'm planning some serious relaxation (but also a run if the weather cooperates). I've got some handspun singles ready to be plied and obviously plenty of sweater knitting to do, so if the weather is less than optimal, I won't mind being stuck inside.
Posted by Sarah at 4:57 PM