I can't believe that it's already the last week of June -- where is this summer going? I feel like I've spent most of the month rushing around, even when I've supposedly been on vacation, so I'm grateful that the 4th of July will fall in the middle of the week next week and give me some time to pause.

With the socks getting finished up last week, my only active WIP remains my handspun Boxy, which honestly is starting to become a slog. I am very close to being finished; I'm on the second-to-last color on the back, and once I finish the back, all I'll have left to do is join the shoulders, knit the collar, and knit the sleeves (which frankly aren't very long and will be fast because they're worked in the round). I originally thought I'd lengthen the sleeves because I had plenty of yarn, but I'm going to play that by ear. Because of the way the sweater is constructed, the sleeves start a good way down the arm, so I may end up with sleeves that are a comfortable length if I follow the pattern as written. Here's how it's looking at the moment, though because the back is rolling, it's hard to see how much has been knit. 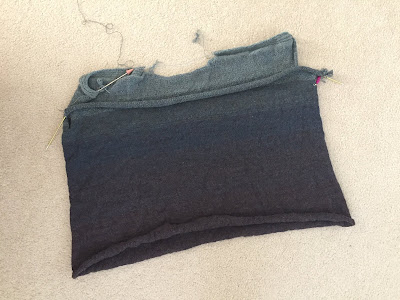 Because I didn't have any smaller project on the needles before we went away, I did some digging and found a project bag with a barely started dishcloth. That proved to be a good take-along project for the weekend, and I finished it up in the car on the way home on Sunday. 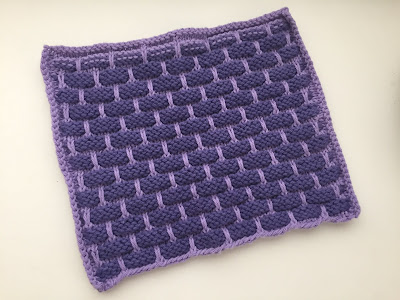 I have no idea when I started this or what shades of Sugar'n Cream I used; I've got a bag of scraps and leftovers and have been using them up whenever I feel like knitting a dishcloth. As you can see, I ran out of the dark purple on the final stripe, so I made do with the lighter shade. I had a good deal remaining when I finished binding off, so I decided to add a little border to the sides. All I did was pick up stitches on each side, purl a row, and then bind off. It made for some extra ends to weave in but I rather like the look of it and may continue to do this for future dishcloths. The pattern is the famous Ballband Dishcloth; I've knit it so many times by now that I have it memorized.

I'm sure I'll be casting on another smaller project soon for my lunchtime knitting, but for now I'm doing some design swatching.

Meanwhile, though my knitting hasn't been very prolific, I have been reading quite a lot. In the past few days, I've finished up two books: Quiet: The Power of Introverts in a World That Can't Stop Talking and The Amazing Adventures of Kavalier & Clay. These are both books I've long wanted to read, and I enjoyed them both immensely and gave them both five-star ratings. Though they're very different (the former is nonfiction and the latter is very much fiction with a bit of fantasy built in), they both appealed to my intellect. Quiet was a great insight into my own personality, as I'm very much an introvert (and a shy introvert to boot). Kavalier & Clay, on the other hand, might not seem like the kind of book that would appeal to me, as I'm not into comic books or superheroes, but I thoroughly enjoyed Michael Chabon's writing, as I always do. Notably, this was the first one of his books that I've read where I haven't felt like the storyline took a sharp veer in a different direction. I did feel a bit unsatisfied with the ending, but it felt correctly placed for the trajectory of the narrative, if that makes sense. Up next is an e-book I won in a Goodreads giveaway, The Lost Love Letters of Henri Fournier. I'm looking forward to losing myself in a little historical fiction (minus superheroes this time around).
Posted by Sarah at 10:46 AM