We've finally made it to the last day of January, and it seems fitting that it's leaving in a deep freeze. I've spent the past two days pretty much confined to my house with Rainbow, who school has been closed due to insanely cold temperatures (yesterday it was between 20 and 30 below with wind chills). Luckily my boss has been really flexible and allowed me to work from home, so I've been able to keep an eye on my e-mail and do the work that needed to be done from the comfort of my home and without having to get dressed up. Tomorrow, though, we begin a new month, and the weather should be more typical for this time of year, so we'll both be going back to our routines.

I'm still working on some secret knitting that I can't share, but I made a point of casting on something new so that I don't have to keep alluding to secret things. When I released my Elodia Mitts, it was my intention to design a hat to match, and I'm very happy to have finally gotten the sample on the needles. 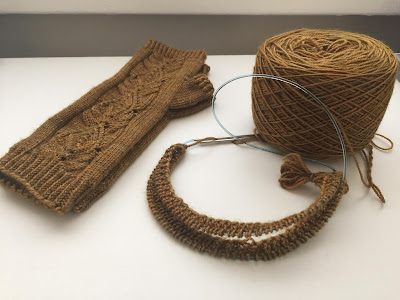 There's not much to it just yet (just a bit of the brim at this point), but I'm hoping to give it some attention over the next couple of days so that I can get to the point that it's suitable theater knitting. Rainbow, my brother, my future sister-in-law, and I are going to see Charlie and the Chocolate Factory on Saturday afternoon, and I will need a project! My plan for this hat is to have just a small amount of the lace pattern near the brim and then transition to all stockinette, so provided I can get to that point, I should be good -- otherwise, I will be forced to cast on a sock or other plain stockinette-in-the-round project.

The start of a new month tomorrow also means the start of a fun KAL I'll be participating in as both a knitter and a designer. A couple of months ago, I was approached by Lisa Ross of Paper Daisy Creations, who I met last summer at the TNNA show in Cleveland, about being a designer for a KAL and fundraiser she was planning for Down Syndrome International. I enthusiastically said yes, and I'm thrilled to be part of what it's become. DSi has an annual Lots of Socks campaign on World Down Syndrome Day, March 21, and traditionally those celebrating the event wear two mismatched, brightly colored socks on that day to bring awareness to Down syndrome. So Lisa has organized a fabulous KAL running February 1-March 21 in which every single sock you knit (that's right -- you don't need to knit a matching pair!) is an entry for some amazing prizes. In addition, she has recruited a wonderful group of designers (including yours truly) who will each offer one of their sock patterns for 50% off on one day between February 1 and 15. The designer and pattern featured each day will be a surprise, and all sales of the featured pattern each day will be donated to DSi. I'm really excited to be taking part in this event, and I hope you'll join me! You can find all the details about the participating designers and the rules for the KAL in this thread in Lisa's Ravelry group.
Posted by Sarah at 4:47 PM