It has been quite a week, but thankfully (not that I want to tempt fate) it seems to be calming down a bit. Last night I was able to enjoy that glass of wine I forgot to pour on Tuesday, and today I'm getting a little bonus time to myself. Rainbow has her annual check-up at the pediatrician this afternoon, so I took a half day off from work -- I'm actually writing this as I sit at the kitchen counter enjoying my lunch!

It's Thursday, and on Thursdays Carole invites to think in three, so today I'm talking about three things I'm looking forward to that should happen in the next few days. 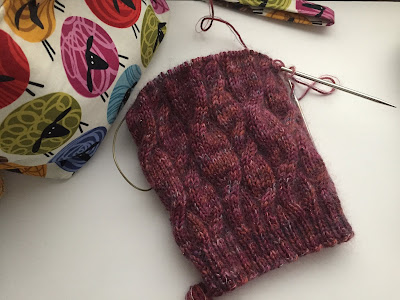 I have just a few more rounds to work before I get to the crown shaping of my Neon, and it's a good thing, too, because we've had some gross damp weather here the past 24 hours or so and are due to get some snow tonight. 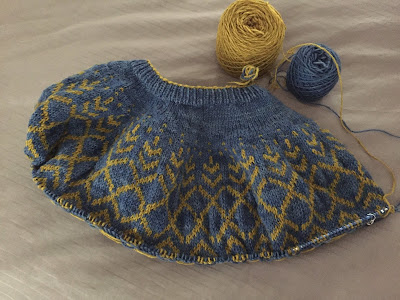 I have less than 10 rounds of colorwork to go on the yoke of my Darkwater, thanks to the past few evenings, and I've found that I've started trying to speed up my knitting a bit so I can get through the yoke before I run out of that first ball of my main color. I'm planning to alternate skeins once I'm only knitting with one color, and I really don't want to have to do that while I'm still in the two-color portion, so illogically I'm racing my yarn. I know I'm far from the only person who does this (just as surely as I know that knitting faster does not make the yarn last longer). 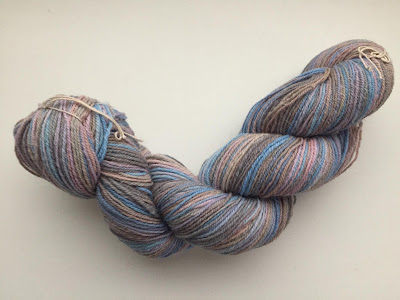 I am totally ignoring the fact that I have zero room for more socks in my sock drawers and in fact already have socks that don't have a place to live by planning the next pair. Yesterday kicked off the second annual Lots of Socks KAL on Ravelry, and while I'm delighted to be participating as a designer again (more on that later in the month), I'm also going to jump in as a participant. This yarn is handspun Cheviot that came off my wheel in late summer 2018, and it's going to be turned into a pair of Louisette Socks. I'll be winding the yarn later today and casting on as soon as I finish up my hat. I even have a new pair of needles to try out! Ideally I'll get them started tomorrow, as I am signed up to donate blood tomorrow morning and will need to rest for a couple of days afterwards, meaning a perfect opportunity for sock knitting.


How about you? What are you looking forward to at the end of the week?

*I know that "they" say it's perfectly acceptable to end a sentence/phrase with a preposition now, but it still makes me twitchy. That said, "Three Things to Which I Am Looking Forward" doesn't have quite the same ring.
Posted by Sarah at 1:05 PM