It's Wednesday again (how is it that this keeps happening so quickly?), so I'm linking up with Kat and the Unravelers again to chat about my reading and my knitting. 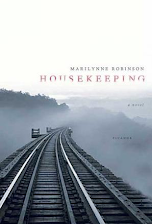 For the "Originally published within 5 years of the year you were born" square on my second bingo card, I picked Marilynne Robinson's Housekeeping, primarily because it was on a New York Times "best books" list for the year I was born (it was actually published the year before, but that still works) and it was immediately available in audio from the library. Bonus: It was only about 6 hours long. I listened over the course of several days, while exercising and doing things around the house. I appreciated the writing, but after the first chapter or two, I was very confused and had trouble following it. I thought perhaps that it was a case of me not paying full attention (a common problem with listening to books for me), but the summaries I found online confirmed that I'd heard everything correctly. I just didn't get it. I gave it 2 stars, mainly because the writing was good but the story bizarre. 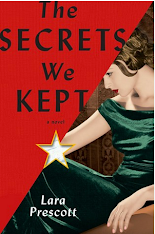 A much more enjoyable read for me was The Secrets We Kept, which I selected for the "Set in a place you'd like to know more about" square on my card. This book takes place during the early days of the CIA and in the USSR and follows several story lines by focusing on several women: a Russian-American woman new to espionage, a American veteran of the OSS (the precursor to the CIA), and the mistress of author Boris Pasternak who was said to the be inspiration for the character of Lara in Doctor Zhivago. I don't know how much of the story was embellished and how much was fact, but I found it to be a really entertaining read and plowed through it in just two days. I gave it 4 stars.

I now have three squares left to fill on my second bingo card. I am reading two of those books right now, and I think I've certainly made filling this card a challenge for myself, because both of these books are more than 500 pages! For the "More than 500 pages" square, I'm reading Stamped from the Beginning, which is an excellent read but not a quick one! It's essentially a history text, so it's dense and requires attention. For the "Classic" square, I am reading Little Dorrit, which I've had in my Kindle library and wanted to read for a while, since I watched the 2008 miniseries. It's good, but it's also Dickens, which means that it's not a quick read. My last square to be filled is "With more than one author listed on the cover," and I've already selected my book to fill it. I'm going to be rereading The Resilience Factor, which I first read in a college seminar (one of the authors was my favorite college professor). In addition to filling that final square, I think it will also be a helpful read for these times. I don't know if I can get through all three of these books in the next 13 days, but I'm sure as heck going to try!

I can't seem to read without doing something else, with the exception of the reading I do in bed right before I go to sleep, and over the past few days I've been working almost exclusively on my Torbellino. As of yesterday afternoon, the body is done! 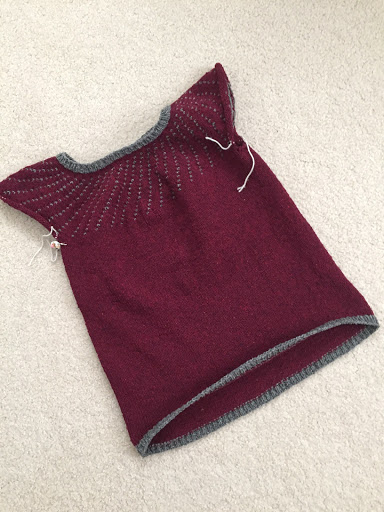 It obviously will need a good blocking to get that hem to stop flipping, but I think it looks worse than it actually is here because the back part of the hem is lower than the front. I wove in most of my ends after I finished binding off the body, so now it's time to pick up for the sleeves. I am hopeful that they will knit up quickly -- we're still experiencing very hot, humid weather here, but I know fall will be here before we know it, and I'd love to have a new sweater ready to wear!