So many things have been canceled this year, but if you heard a little cheer yesterday, it's because spinners were celebrating the start of the second Tour de Fleece for the year. Yes, you read that correctly. The first one was held during the original dates for the Tour de France, even though it was postponed. But yesterday the Tour de France started for real, which means we get another chance to spin along! I suspect that TdF2 will feel a little more normal because there will be cycling to watch while spinning. I myself am not a big cycling fan, but the Mister and I have always enjoyed watching the evening replays of the day's race when we can, and I feel a little more motivated to keep treadling when I see how hard the cyclists are riding.

While I've been a little less focused on spinning since the end of Stash Dash, I have been working on my purple Rambouillet singles again, and I think finishing them (and plying them) is a reasonable TdF2 goal. I'd estimate I'm about halfway done with my singles; this is the second bobbin, which coordinates so nicely with the singles, don't you think? Because my fiber has been split up into little bundles, it's very easy to sit and spin up one or two at a time. 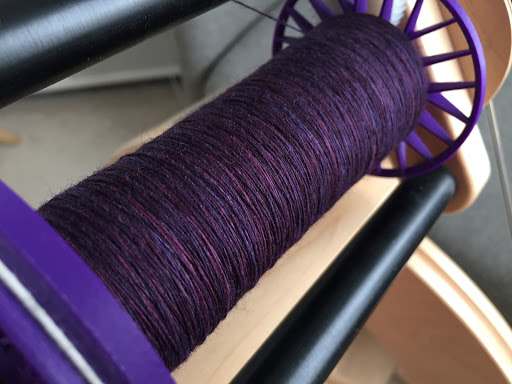 I'm excited to get through this fiber and add the resulting skeins to the pile of yarn I've spun this year, which is getting quite sizeable! Mary commented last week that she'd love to see all that yarn together. A lot of it was spun for Stash Dash, but because I was doing so much spinning at the beginning of Stay at Home, here is everything I have spun since then (around March 12 or so): 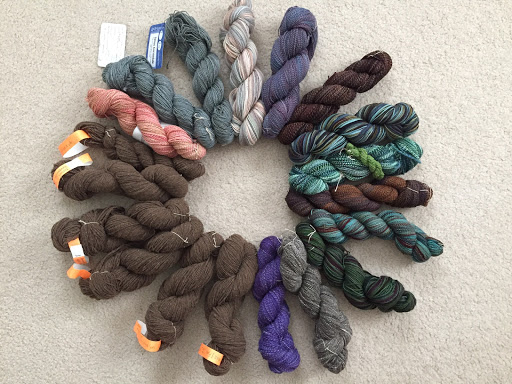 What you see here is a total of nineteen skeins (plus one tiny mini skeins) containing more than 5,565 yards of handspun. And I just realized that I left one skein out, which accounts for another (I think) 550 yards. So let's say that I've spun about 6,000 yards of yarn in less than five months. If I achieve nothing else during this pandemic, I'll at least have made a dent in my fiber stash!