I'm looking at the clock as I type this and can't believe another weekend is almost over -- where does the time go? We didn't do very much this weekend other than a trip to Target yesterday (which was, frankly, exhausting due to all the people) and a little birthday party for my nephew at the park today, but somehow the past two days have flown by. I honestly think I've been getting more crafting done during the week than over the weekend lately!
I suspect you will not be surprised that I finished another skein of handspun this week, and I think it's the second most-recent Southern Cross Fibre club shipment I received. This was April's club (they're usually mailed out toward the end of the month to begin with, and the mail is obviously taking longer these days, so I don't think I received it until close to the end of May). This moody colorway, called Hope Springs, was dyed on grey Corriedale fiber, and I think that color in the original fiber really gives such depth to the colors. 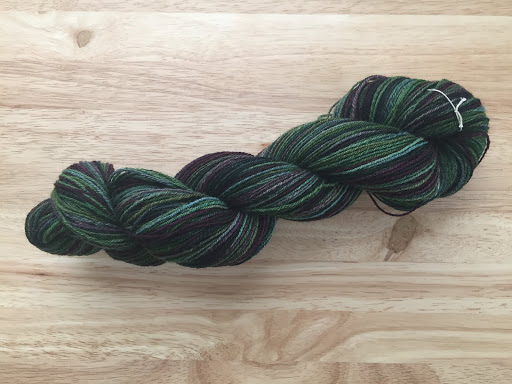 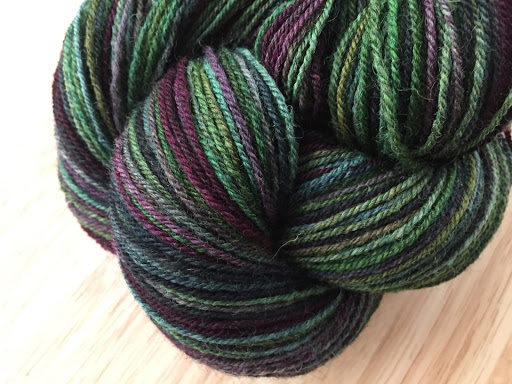 I'm very pleased with the finished appearance and the amount of twist in the yarn, but the yardage was a bit low -- only 319 yards/291.7 meters from 4 oz./113 g of fiber. Normally I hope to get about 350-400 yards for that amount, but I suppose this fiber was on the denser side. It'll be excellent for socks, though, and the yarn could easily be stretched by using a contrast color for cuffs, heels, and toes. And according to the special rules for handspun, it'll count for more than 1,160 meters toward my total!
This skein was a bit of a palate cleanser because I'm getting ready to start another sweater spin. The next one won't be quite as bit an undertaking as the fleece, but I will need some stamina to get through spinning a lot of the same color. This is what's on tap next: 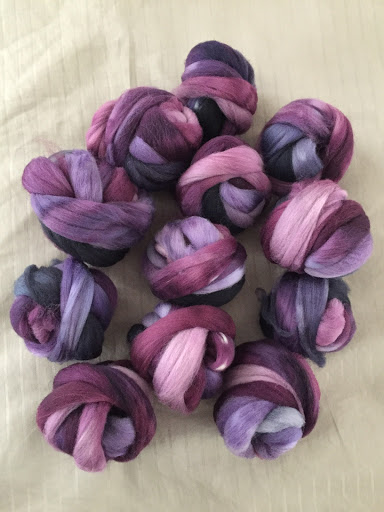 This was February's Southern Cross club shipment, Rambouillet in a colorway called Thunderstruck. I loved it so much when David posted the spoiler photo that I went on to the website and bought three more lots of it. My plan is to spin up all four bags into three-ply fingering and use it along with the skein of Pebbles I finished a few weeks ago in a Tiny Dancer (Ravelry link) sweater. Although all the fiber is purple, you can see that it's multiple shades, so I'm splitting up the fiber into some smaller pieces before I spin to mix it up as much as possible. I am spinning using my WooLee Winder, which allows me to get more on my bobbin than my standard flyer, so I will be spinning three bobbins of singles. I have four bags of fiber, so I split one of them into thirds and am adding some additional fiber to each of the three other bags. All the purple should be well mixed up, and I'll be plying it all together in the end, which should counteract any inconsistencies. Here's hoping the plan works as well in real life as it does in my head!
Posted by Sarah at 4:57 PM