If you're wondering about the strange post title, it's because I'm feeling a little punny this morning -- this is a catch-up post (get it?). (Oh, and the answer to the question is always Heinz. Always.)
I'm still trying to get Rainbow to pose with her finished blanket, but thus far she's only been interested in snuggling with it. I guess it's a indication of the blanket's success that she's been sleeping with it every single night since it was finished. Blocking went well and squared it up decently, but it also stretched it out just enough that the fabric has really nice drape now. Here it is atop my queen-size bed for scale: 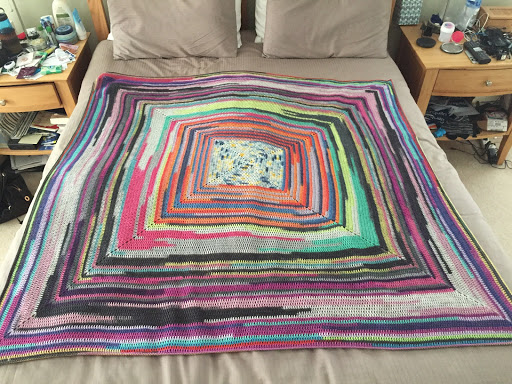 The details: I used Casapinka's Blanket of Calm (Ravelry link) as a jumping-off point to get me started, mainly because it was free and had just been released when I was thinking about starting this blanket. Once I understood the construction, I didn't have to refer to the pattern at all. The entire blanket is double crochet, with about four rounds of single crochet for a border. I used an F hook (3.75 mm) for the whole thing; I didn't swatch, but I knew that I generally use a US 5 (3.75 mm) knitting needle with fingering weight yarn for things like shawls, so I figured it would work well with crochet, too. The very center of the blanket is Holly Press Fibers SHEEPISHsock leftover from my I've Got Sunshine (Ravelry link) socks and the rest of it is Knit Picks Felici. I used two skeins each of the colorways Thunderstruck, Summer Camp, Test Pattern, Goth Kitty, Material Girl, Ever After, and Dark Rainbow (though there's about half of the second skein of Dark Rainbow left because Rainbow declared the blanket Big Enough at that point). Altogether, I used 677 grams -- 2,957.9 yards/2704.7 meters -- of yarn, and the only Felici left in my stash is that half skein or so of Dark Rainbow. I'm quite happy to have all that yarn out of my stash and that big boost to my Stash Dash total (which right now stands at 13,445.5 meters!).
Over the weekend we attended our nephew's first birthday party in the park. The theme was the Very Hungry Caterpillar, and I have to say that my sister-in-law did an excellent job on the treats (she ordered the cookies, which, though it's hard to see here, are foods with holes in them, just like in the book): 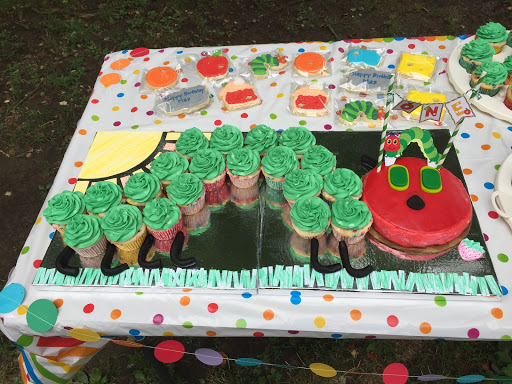 My nephew, however, remained unimpressed by the whole thing: 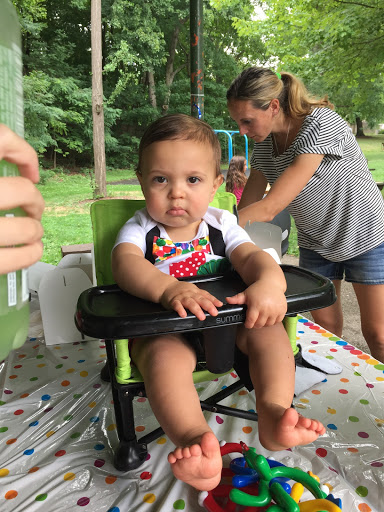 (That's Rainbow's hand and drink on the left side of the frame, trying to get his attention so he'd look at the camera. And yes, quite a few people at the party were not wearing masks. My sister-in-law comes from a Faux News family. Le sigh. We were all masked, and thankfully the party was outside.)
The good news is that the crocheted alpaca I made him seems to be a hit. Or at least it passed his taste test. I received this photo from my brother-in-law this morning: 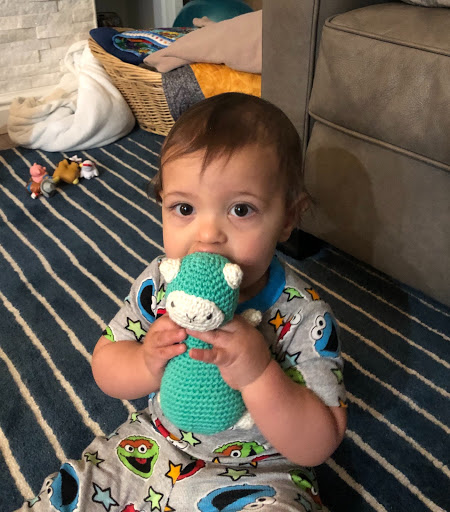 I can't ask for a better reception than that to a hand-made gift for a 1-year-old!
Posted by Sarah at 8:23 AM